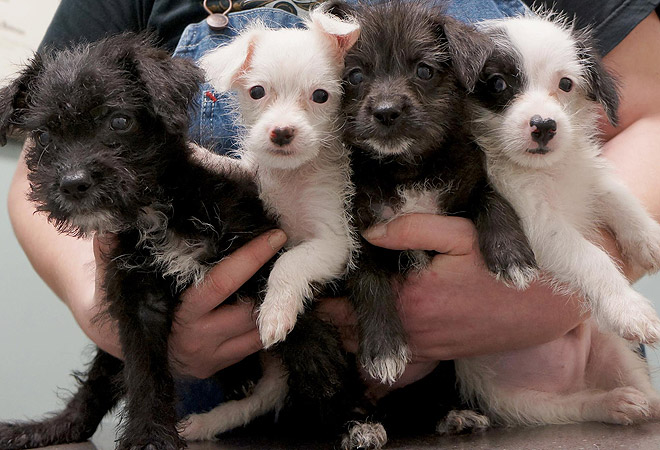 In what will surely be your feel good story of the day, local woman and executive director of Bill Foundation Dog Rescue Annie Hart rescued four stray puppies from a homeless man who was storing them in a sealed plastic bin. “I got a call from Sam of WagAware that a homeless man had four puppies in a Tupperware bin with the lid on it,” Hart writes in a piece for Dogster. “They weren’t getting nearly enough air to breathe. So I jumped into my car with my husband, James, and our dog, Arnold.”

Hart and her husband pursued the bus until she was finally able to board, sit next to the man, and persuade him to give her most of the dogs. “After no small amount of convincing and all the cash in my pocket, the man finally agrees to give me three of the puppies, but he says the last is already promised to someone. I had no desire to leave any of them, but I agreed,” she said. Don’t fret for the last puppy, though—Hart’s husband was able to pay the man an additional amount for the little guy. All four pups are now safe and sound.

Hart’s successful mission had us ready to run to the nearest shelter to help other animals in need. If you’re feeling the same way but aren’t sure where to start, take a look at the map below, where you’ll find a variety of pet adoption agencies around town.

In the meantime, maybe the West Hollywood Sheriff’s department could put Hart on the case of their own pooch that needs rescuing.

PUPDATE: Catching Up With Annie Hart And The Tupperware Pups