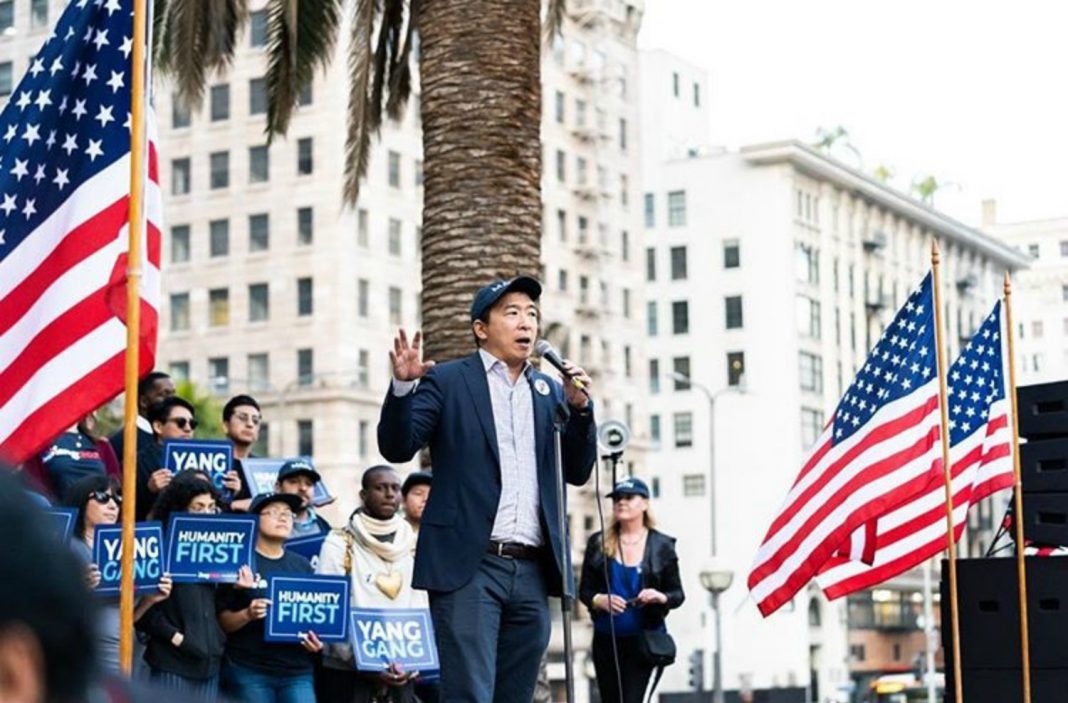 For those who know Andrew Yang, the Democratic presidential candidate is many, often contradictory things to many, often opposing people. Although he currently only polls at 3 percent, the former entrepreneur has attracted a passionate and motley following with his seemingly apolitical brand of wonkish economic populism. Moreover, that 3 percent and over $1.7 million in donations has qualified the 44-year-old for a spot in the upcoming Democratic Party debates.

The first-time political hopeful has not had the easiest time controlling the narrative around his coverage. For some, he’s the anti-circumcision candidate—a position that arose from a three-word response to a tweet that he says received considerably more attention than he anticipated. (If president, he says he has no intention of legislating away the procedure, which has disappointed the “Intactivist” community). For others, he is the meme candidate. Helped by an appearance on the Joe Rogan Experience podcast, the memesmiths of Reddit and 4chan rallied around his campaign and began disseminating pro-Yang content across the internet like Allied planes dropping propaganda fliers over Vichy France. Yang won over the largely male and largely conservative online enclaves with his support of Universal Basic Income (UBI), the third and primary reason most have heard of him. Yang has made a $1,000-a-month payment to all citizens, which he calls the Freedom Dividend, his central policy.

At a rally in downtown Los Angeles on Monday, Yang summed up his candidacy thusly: “There’s an Asian man running for president who wants to give everyone $1,000 a month.”

As with Donald Trump and Bernie Sanders in 2016, Yang’s political rookie status and unpolished style have drawn in voters distrustful of the familiar, a group who’ve dubbed themselves the Yang Gang. Even though the attention has won him this current pool of supporters, it’s also led to him being labeled a fringe, oddball candidate. It hasn’t helped that many of his most vocal supporters—those from the sordid parts of the web—have some fairly unsavory views of their own. Almost as soon as Yang began to receive mainstream media attention, he had to answer for this faction of supporters.

“Every once in a while, someone will say to me, ‘Hey, it’s not like you can choose who supports you in the corners of the internet,” Yang tells me before the rally at Pershing Square. Even so, Yang, who is Taiwanese-American, finds it a little frustrating having to repeatedly field the same questions about internet trolls and racists. When asked why white supremacists had marshaled around his campaign at a CNN town hall, Yang drew laughs from the audience when he pointed out that he doesn’t “look like much a white nationalist.”

But for all the focus on Yang’s followers on the far right, his policies actually place him squarely in the more progressive wing of the Democratic party. He’s avoided being labeled a socialist thanks to his background as a Silicon Valley-adjacent businessperson and his technocratic language grounded in “math” and data. “There’s something disarmingly intellectually neutral about that, where people don’t feel like I’ve got an ax to grind with anyone in particular, ‘cause I really don’t,” he says.

People don’t expect him to be critical of market capitalism, so people don’t credit or reproach him when he suggests the need for large-scale government intervention in reshaping the economy. It also helps that he frames his censure of capitalism positively, not arguing against capitalism, but arguing for what he calls “Human-Centered Capitalism.” No matter how it’s phrased, though, it boils down to a rebuke of neoliberalism.

And he’s tried other ways of addressing issues within an existing framework. He gave the nonprofit sector the old college try with his much-lauded organization, Venture for America, which placed top college graduates in startups in struggling cities. Six years and millions of dollars later, he stepped down from the company, concluding that “the scale of that solution [isn’t] commensurate to the size of the problem, because as much as you push it, the marketplace does not fundamentally care about the wellbeing of tens or hundreds of thousands of displaced cashiers or insurance agents or truck drivers or call center workers.”

His rally offered proof of the broad appeal of this message and the unconventional package it appears in. Yang, who studied economics at Brown, has turned his unabashed nerdiness into a meme of its own. He is the hyper-enthusiastic high school teacher and his supporters are the jocks, goths, and potheads who never knew school could be so fun.

In making the case for UBI during his speech, Yang points to a current example in one state where “everyone in that state gets between one and two thousand dollars a year, no questions asked, and what state is that?”

“Alaska!” the crowd shouts on cue.

A solitary “Marijuana” floats out of the crowd.

The call-and-response structure makes the proceedings feel like a showing of cult classic The Room, where everyone knows the jokes ahead of time and shouts them out together (fortunately for Yang, no one throws spoons). Creative hecklers are rewarded with an acknowledgement by Yang, who is in on the joke the whole time.

One supporter, Diana, sticks to the outer reaches of the square with her toddler, Haim.
“His wife is a stay at home mom with an autistic kid,” she says about Yang. “I feel like he’s going to be looking out for moms and understanding our hardships.” (Yang does frame UBI as a way of compensating women for all the unpaid domestic labor they typically assume).

Diana’s husband, Jacob, explains that the two of them “worked really hard on Bernie’s campaign four years ago,” but after having Haim, he looks at the future differently. “It’s going to be a future of tremendous scarcity,” he says.

“Yang’s voice, amongst all of the democratic contenders, is the one that I think most needs to be heard.”

Two high school juniors, Emma Finkel and Sydney Hayes, stand in the back next to an installation of Earth Day signage that they had been asked by Yang to bring from their school in Santa Monica. “It was nice to hear that other people also care about what we’re doing,” Emma says.

But people on the other end of the ideological spectrum also appeared at the rally. A man named Michael stood nearer to the front of the crowd, accompanied by his 15-month-old Czechoslovakian Wolfdog, Aisling (“Oh shit, that’s a wolf,” one security guard gawks, apparently unsure of the protocol in case of wolves).

“I like that he supports decriminalizing Bitcoin,” says Michael. He also approves of UBI, but not for the same reason as Yang’s left-leaning fans. “His Freedom Dividend is actually kind of a conservative policy and a conservative idea about welfare in its own weird way.” (To his point, Yang’s proposal would fund his Dividend through a Value Added Tax, which the Tax Policy Center describes as a regressive form of taxation that disproportionately impacts poorer households.)

Yang’s denouncements of white supremacy doesn’t seem to have dampened Michael’s enthusiasm. He says he first heard about Yang on 4chan, the online image board notorious for fostering toxic beliefs online.

“I do identify with the Alt-Right,” says Michael, who says he served as an alternate delegate for Trump in 2016. He plans on switching parties to vote for Yang in the Democratic primaries.

“Alt-Right for the Yang Gang—fuck it. Because in Andrew Yang’s America, all the white guys who have been chased into poverty because they have politically incorrect views are getting $1,000 a month.”

“So are all the black people who have suffered abuse at the hands of the police and jails,” he adds. “That’s step towards real equality. Let’s not have the poor people be at each other’s throats while the rich people laugh.”

RELATED: Alt-Right Fanboys Are Crushing on This Democratic Presidential Candidate