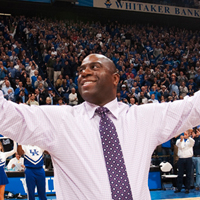 Last night the news Dodger fans had been awaiting since November was finally announced: Frank McCourt and the Los Angeles Dodgers have selected a buyer for the team, Guggenheim Baseball Management LLC—Magic Johnson, Peter Guber, Stan Kasten, Bobby Patton, Todd Boehly, and controlling partner Mark Walter. GBM has purchased the team for $2 billion. Plans are underway for McCourt and “affiliates of the purchasers” to form a joint venture which will acquire the stadium property for an additional $150 million, according to a statement from the Dodgers.

Yes, McCourt will still have a (very, very rich) finger in the Dodgers pot given the structure of this deal, and Johnson’s stake in the team will be small, but it’s worth cheering McCourt’s diminished role. He’ll be much less distracting—both to players and to fans—as a parking lot owner.

At its heart this is the kind of story we love: One hometown sports legend has swooped in to save another. Given Johnson’s success as a local businessman since his days as a Laker and Kasten’s experience as a baseball executive, the community can feel confident the Dodgers are in good hands and sink back into talking about who’s starting, who’s hitting the ball over the fence, and how far the boys in blue can go this year. Opening Day, April 10, is just around the corner. See you there?