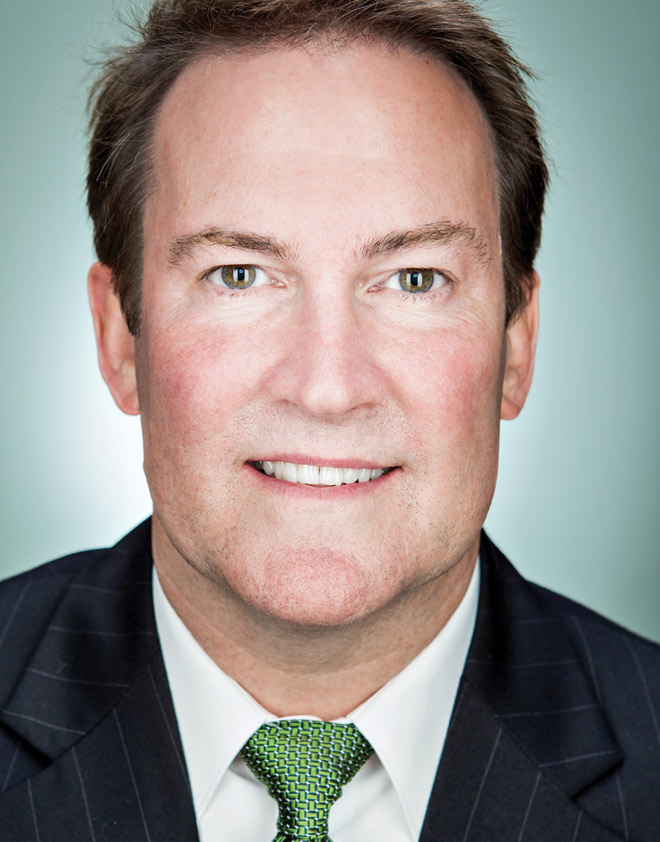 Among Los Angeles’s field of mayoral candidates, Kevin James sticks out like plaid on polka dots. A gay Republican in a bedrock blue city, he still speaks with the folksy drawl of his Oklahoma birthplace, despite having moved here 25 years ago. And unlike his three opponents (city council members Jan Perry and Eric Garcetti, city controller Wendy Greuel), who have each been in office for more than a decade, James has never run for anything. He worked as an assistant U.S. attorney in the early ’90s and has spent most of his career doing entertainment litigation, including a few years at the firm of legendary Hollywood attorney Bert Fields. James, who is 49, stumbled into politics from talk radio, where he hosted KRLA’s The Kevin James Show, a rambling AM call-in program on which corruption in city hall was a favorite subject. James left the show in 2011, after nearly five years, to run for mayor.

Though he lacks name recognition—James jokes that he hopes people confuse him with the actor from King of Queens—his campaign has turned out to be more than just a quixotic sideshow. He practices a disciplined style of retail politics, having visited more than 50 neighborhood councils in the past 18 months. On the trail he pounds away at what he sees as the fiscal recklessness of his opponents, who, he insists, have brought the city to the brink of bankruptcy. Even the fund-raising game has begun to look up. James was being outraised ten to one by some opponents until Republican operative Fred Davis recently announced that he had formed a super PAC called Better Way LA to promote James’s candidacy. We met up with James at Obikà, in the Westfield mall near the Century City law office where he works, to talk about politics and what’s in store for L.A.

Let’s get this out of the way: In a city like L.A., it must get lonely being a gay Republican. How do you define yourself politically?
I’m an independent Republican. Obviously I’m an openly gay man. I support gay marriage. I differ with some members of my party.

You’re running for mayor of a city that’s a long way from your hometown. What’s it like where you come from?
I was born in Norman, Oklahoma. My parents met at Oklahoma University. I went to OU. My mom taught high school math. When I was young, my dad, a salesman, got transferred to Dallas. We lived in Garland, Texas, which is one of these big sports meccas that you read about, a Friday Night Lights kind of environment.

When was the first time you visited Los Angeles?
My dad’s cousin was a pilot for TWA. I was in middle school when I first came out to visit him. He lived in Manhattan Beach. I loved it. There was Disneyland. There were mountains in the city. Where I’m from, the Hollywood Hills are mountains. There was the ocean. I decided I was going to move here.

So how do you solve the fiscal crisis?
We must have real, serious pension reform and real, serious salary reform. The way that our city council has been making payroll is by draining special revenue funds. They’ve signed contracts that we can’t afford. What I can tell our city employees is that I can guarantee you a job, but you’re not going to make as much money as before. Everyone is going to have to make a little less so we can continue to provide the city with services.

Do you really think that’s an argument unions will swallow?
If it were a couple of years ago, the answer would be no. Today, because of the mismanagement of my opponents, we have a new type of leverage—the looming possibility of bankruptcy. I’m going to show how the city could soon be in bankruptcy. Either they force us into insolvency or they work with us as a team.

What has changed about the city from when you first arrived?
When I came here in 1987, it was a land of opportunity. Los Angeles was also a leader in so many ways. We were the entertainment capital, we led in aerospace, in venture capital. You could buy a home and raise a family. It was workable, livable, affordable, and attractive.

Where do you think Los Angeles could be a decade from now?
It could be a business-friendly city again, a place where residents feel their voices are heard. The most consistent refrain I hear is that people feel city government doesn’t listen to them. There is a chorus from neighborhood councils, home owner groups, and the like—that in order to get heard on an issue, they pretty much have to sue city hall. We just have to be smarter about the way we’re governed. You have to open the door to innovation and opportunity. If we’re a place where businesses want to be, then everything else falls into place. Jobs come, young people come. Research comes. There is so much that was here not too long ago that seems to have gone missing.