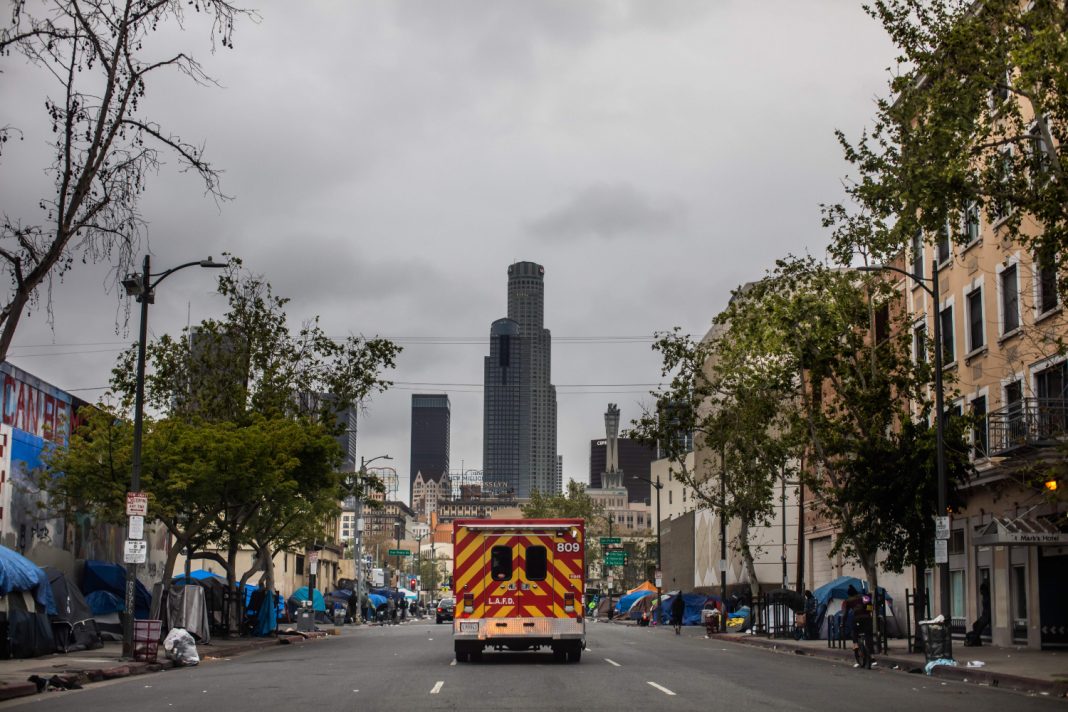 Space in Los Angeles County’s overrun hospitals has become so limited that ambulance crews have been ordered not to bring in patients if they have almost no chance of survival. Medical officials say this drastic street triage is necessary in order to care for people who may still be able to recover, the Los Angeles Times reports.

The decision was made as bodies are literally piling up at area hospitals, forcing medical staff to make life and death decisions about who gets treatment, and at what level.

In normal times, even patients in the most dire conditions would be taken to hospitals because there was still room to accommodate seemingly hopeless cases. Now, a January 4 memo issued by EMS Medical Director Marianne Gausche-Hill directs ambulance workers not to transport people who might otherwise have been declared dead at the scene. These patients include those whose hearts have stopped and who do not respond to attempts at resuscitation, have no pulse or blood pressure, or signs of movement or breathing.

Emergency workers are directed to continue resuscitation efforts until a pulse can be restored and the patient stabilized, at which point they can be taken to a hospital.

In pre-COVID days, EMS personnel consulted Reference 814 of the California Health and Safety Code in determining when to pronounce a patient dead in the field. Now, as the new memo states, “Note that this directive supersedes Reference 814.”

“[M]any hospitals have reached a point of crisis and are having to make very tough decisions about patient care,” Dr. Christina Ghaly, the L.A. County director of health services, said at a briefing Monday. “The volume being seen in our hospitals still represents the cases that resulted from the Thanksgiving holiday. We do not believe that we are yet seeing the cases that stemmed from the Christmas holiday. This, sadly, and the cases from the recent New Year’s holiday, is still before us, and hospitals across the region are doing everything they can to prepare.”

Another life-saver in desperately short supply in the county is oxygen. That growing crisis was addressed in another Monday directive instructing ambulance crews to give oxygen only to people whose oxygen saturation levels fall beneath 90 percent.

According to the memo, “An oxygen saturation level of 90% is sufficient to maintain normal tissue perfusion in most patients,” though exceptions can be made, as a target of 94 percent saturation is still recommended for cases of carbon monoxide poisoning, suspected pneumothorax, shock, and traumatic brain injury.

In another change, a paramedic or EMT may assist in monitoring up to four patients in temporary ambulance receiving spaces outside emergency rooms. Under the old rules, one ambulance worker could tend only to one ambulance patient at a time.

L.A. County Public Health Director Barbara Ferrer is again sending out the warning that things can still turn even darker.

“We’re likely to experience the worst conditions in January that we’ve faced the entire pandemic, and that’s hard to imagine,” she said. “Everyone should keep in mind that community transmission rates are so high that you run the risk of an exposure whenever you leave your home. Assume that this deadly, invisible virus is everywhere, looking for a willing host. Don’t let that be you or someone you care about.”