Home Business All News, All the Time 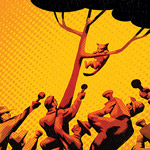 Nancy Bauer Gonzales is news director of two CBS-owned L.A. television stations—KCBS (Channel 2) and KCAL (Channel 9)—and her mandate is to air as much local news as possible, as often as possible. That means a combined 11 hours each weekday, more news than anywhere else in the Southern California market. “They’re at 5, 6, 11, 12, 2, 3, 4, 5, 6, 8, 9, 10, and 11,” says Bauer Gonzales, who sounds as if she’s not done expanding the schedule. “I used to come into work thinking, ‘OK, how can I push the business this week?’?” she tells me at the stations’ headquarters in Studio City. Now it’s ‘How can I push it before lunch?’?”

The answer always is more news. L.A. is being bombarded with news—it’s on virtually nonstop, starting each morning at 4 a.m. (KNBC, Channel 4) and running throughout the day and late into the night. The stretch from 5 to 7 a.m. is especially intense: Besides KCBS and KNBC, there is news on KTLA (Channel 5), KABC (Channel 7), and KTTV (Channel 11). All told, 32 hours of local news every day, and that doesn’t count non-English stations or the morning gabfests on channels 5 and 11. Expect additional slots to be filled in the coming months.

TV stations are doing this not out of some newfound commitment to journalism but because the economics make sense. News generates nearly half of a station’s annual revenues and usually turns a profit, especially in large markets like Los Angeles. It’s cheaper to put together a newscast than it is to buy high-end syndicated talk shows—in some cases, a lot cheaper. Once the anchors, reporters, producers, helicopters, and satellite dishes are in place, the incremental expense of scheduling another 30 or 60 minutes of news is relatively low. What’s newsy at 1 p.m. will probably stay newsy at 3 p.m.

KABC, just as an example, is said to be paying $240,000 a week to broadcast Oprah, at least twice as much as it would cost to produce an hour of news in that same 3 to 4 p.m. time period. The station hasn’t announced what will replace the talk show when Oprah Winfrey exits in 2011, but featuring news would save around $6 million a year, probably enough to offset any ratings declines. Advertisers would likely sign on because they consider news to be quality programming and because there’s little chance their commercials would be skipped over by DVR users (who records newscasts for future viewing?). Another plus: KABC could keep the full share of the advertising money generated that hour. With Oprah, the station gives up several minutes of commercial time for national ads that go to a syndication company.

Stations didn’t used to watch their pennies so carefully, but they got whacked by the recession, with auto dealers and retailers—two once-reliable categories—sharply pulling back on spending. This year should be stronger, given that the economy is improving (maybe) and political ads for the 2010 elections will bring in lots of cash (they can account for up to 8 percent of a station’s annual revenues). But even a decent rebound—research firm SNL Kagan is forecasting a 5 percent increase in local advertising—would pale next to the days before cable, the Internet, and smart phones, when stations were considered cash cows.

That’s putting pressure on the news departments to do a lot more with a lot less. I picked up on the cuts last year when a TV reporter wanted me to comment on a breaking story but didn’t have a news crew available to record my two-minute snippet. Could I possibly drive to the studio? As a money saver for routine stories, three L.A. stations, KNBC, KTLA, and KTTV, have pooled photographers and assignment editors. Last September Fox-owned KTTV axed about 100 staffers and freelancers, a cut so extreme that a producer about to be let go appealed—unsuccessfully—in an open letter to Rupert Murdoch, chief executive of the company that owns Fox. “The best of the best are being [laid off],” he wrote. “Those who survive will be working outside their skill set.” Perhaps the most visible sign of cost-cutting is the loss of several anchors—among them Ann Martin, Paul Moyer, and Harold Greene—whose contracts were not renewed because they made too much money (big-name anchors routinely collect six- and even seven-figure salaries).

For all the additions and subtractions, viewers won’t notice much difference. Local TV news still relies on a well-worn formula of crime and celebrity coverage, national headlines, light features, plenty of weather and sports, and, most notably, the happy-talk exchanges at the news desk (former KNBC news director Bob Long calls it “a full meal package”). It’s amazingly similar to broadcasts of the 1970s, when the format was established—except that robotic cameras, digital editing, and automated control rooms make it more efficient to produce. “It’s very easy to take the same piece of tape and edit it two different ways,” says Bauer Gonzales.

KCBS and KCAL, which make up CBS’s largest duopoly, have a combined newsroom that operates out of the Studio City Broadcast Center. A few hundred reporters, photographers, and producers are shared by both stations (an arrangement that might be adjusted with the recent arrival of a new general manager). Demographics have played a key role in determining which stories are run where. KCAL, a station that was independently operated before the CBS purchase, has more of a community focus, while KCBS takes a regional approach. But at 9 p.m., when KCBS is airing its prime-time shows, KCAL emphasizes national news because it’s found that early-rising businesspeople don’t want to wait until 10 or 11 p.m. “Looking back, we were really smart about combining the two stations,” says Bauer Gonzales. “The duopoly ended up being a good thing, because when times did get tough, we were that much stronger.”

The enterprise is impressive enough, and yet it’s hard to escape the fact that fewer people watch news on any broadcast TV station, impressive or otherwise. They go straight to cable networks like CNN and MSNBC. Last September the 15 highest-rated stations in the Los Angeles market were being viewed at some point of the broadcast day by 728,000 households, according to Nielsen Media Research, down from 1 million households for the same period a year earlier. KABC lost 57,000 viewers; KNBC, 29,000; and KCBS, 27,000.

The audience is not only smaller but older. The Council for Research Excellence, a Nielsen-funded organization, asked people from different age groups to chronicle how much time they spent in front of a screen, be it TV, computer, video game, or smart phone. Those in the 18- to 24-year-old bracket clocked more than eight hours a day, but they were watching live television only 41 percent of the time. Those older than 65 were watching live television 84 percent of the time. “You have all the original providers that have lost audiences as new providers come on,” says Craig Allen, an associate professor at the Walter Cronkite School of Journalism and Mass Communication at Arizona State University.

The problem for stations is not just a splintered audience; it’s finding a compelling reason to stay in business. Viewers of a certain age might remember when TV signals were transmitted from a station’s giant antennas to their own little antennas at home. That was the delivery system for everything from “The Big News” on Channel 2 to Cassandra “Elvira” Peterson on KHJ (now KCAL) to feeds from the major networks. No local stations, no television. But cable and satellite connections have largely eliminated the need for antennas. Last summer’s fire near the Mount Wilson TV towers, bad as it was, would not have interrupted programming for 86 percent of the L.A. households that have cable or satellite, a telling reminder of how the industry has changed.

At the moment there’s a lot of experimenting. News-heavy stations are expanding their Web sites, and many have been promoting smart phone apps, Facebook pages, and Twitter feeds. Others, like KCOP (Channel 13), have dropped their news departments altogether, relying instead on a steady diet of second-tier reruns and syndicated fare (Channel 13 airs a 30-minute newscast by its sister Fox station, KTTV). Then there are the alternative newscasts: NBC produces a show for its Washington, D.C., affiliate that’s made up of repurposed content from NBC News, MSNBC, CNBC, and the Weather Channel. For the affiliate, it’s an even cheaper option—as in free—than producing its own broadcast, and other NBC stations are looking into the package. “We’re in a period of real agitation where people are saying ‘Let’s try this’ and ‘Let’s try that,’?” says Deborah Potter, a former CBS correspondent who is executive director of NewsLab, a Washington, D.C.-based organization that follows the radio and television news business.

None of this addresses the ultimate threat: that networks will one day decide they would be better off ditching their affiliate stations and connecting with viewers through a cable channel—an arrangement that would bring in more revenue for them and cut out the middleman. So rather than watching Survivor on Channel 2, you’d watch it on, say, CBS Cable. But what happens the next time there’s a big earthquake or fire? Who follows local election results? Who covers the routine stories for folks who don’t read a newspaper or a local news blog? There may no longer be a place for the stations themselves, but there is a place, perhaps on cable, for the news coverage they offer. Sorting out the players and the means by which it’s all reengineered is where things will really get interesting.