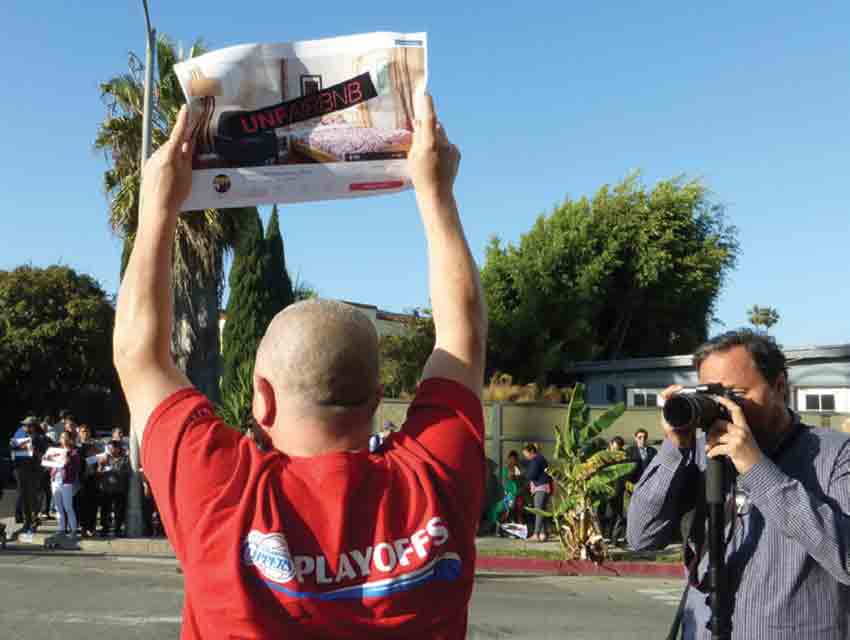 There are no two sides about it: Los Angeles is in the midst of an affordable housing crisis. On average, Angelenos now spend roughly half of the money they make on rent (finance experts suggest keeping that cost to 30 percent of income or less). And homelessness—which has many complex causes—has become so pervasive that the city council declared it a state of emergency this week (26,000 people are now living on the streets or in cars).

As local leaders put their heads together to figure out how to make more affordable housing available, Airbnb—which critics have accused of contributing to if not causing the shortage by creating a financial incentive for landlords to take long-term rentals off the market—is fighting back with a new, contradictory report.

The study, which was put together by a team of Airbnb data scientists and includes an introduction prepared by UCLA Luskin School of Public Affairs Professor Paavo Monnoken, looks at Airbnb bookings and listings data between August 2014 and July 2015 and Aibnb surveys of hosts and guests in the City of Los Angeles. It’s full of interesting nuggets.

Here’s the most defensive findings:

Now, the break-even points across neighborhoods with more than 50 entire home Aibnb listings vary. This chart from the report (below) shows those exact points by neighborhood and provides a glimpse at how the cost of living rises and falls across the city. For example, the average nightly host earnings in downtown is $165. (To put that figure into perspective, a suite at the Biltmore costs about three times as much.) The study, it’s important to mention, flies in the face of another, put out in March by the Los Angeles Alliance for a New Economy, an organization that works in public policy and has been active in labor issues.

The Department of City Planning is holding three short-term rental community listening sessions next week—one in Mar Vista, one in North Hollywood, and one in Lafayette Park—where officials will hear and address questions from residents about companies like Airbnb. There’s been chatter that the city could impose regulations on short-term rentals like those passed in Santa Monica, so the timing of Airbnb’s defense is meaningful. What the community and local leaders take away from it? That’s under construction.