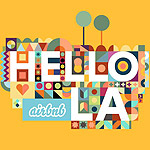 Airbnb has something to say to our fair city: Hello.

The San Francisco-based company has skyrocketed to the top of the community marketplace dog pile, giving folks the world over access to cheapish lodging in over 33,000 cities. The gist is thus: anyone can log on and list their house—ranging from a room in a shared apartment to entire castles, depending on the city—for rent. It’s kind of like buying concert tickets off of a StubHub-esque site: say you’re looking to travel to London, but you don’t want to pay the sticker price for a hotel. Travelers can log onto Airbnb and peruse photos of available lodging in a variety of neighborhoods, but a bit of sifting is required to find the deals (an entire home in Covent Garden is listed at $182 per night, while a private room in a flat is listed at a high $132).

This weekend, the company is hosting the event “Hello LA” as a means by which to introduce itself to us. “Airbnb is an access point to hyperlocal experiences,” said Emily Joffrion, Director of Airbnb’s Consumer Communications. “When we were looking at L.A. and thinking what we love so much about it, it came down to diversity and culture, which is spread around city. There are micro-cultures wrapped around vast neighborhoods, and each neighborhood has a specific flavor and identity. It’s a city where local knowledge gives you access to incredible experiences, which is why we’re so similar.”

The Hello LA event, which starts today and ends October 1st, revolves around five pop-up listings in five different L.A. neighborhoods. “Los Angeles is a car culture, and it can be very difficult for people to get from one area to another,” Joffrion said. “The reason we picked five pop-ups was to enable locals in those neighborhoods to interact without having to leave. It wouldn’t have done L.A. justice to do one big event; we looked at the geography and saw that as an advantage.”

The different listings were co-designed by celebrities (James Franco, Moby, Lake Bell, Anjelica Huston, Molly Sims) and HGTV’s Emily Henderson, and each space comes with its own slew of accompanying events (most of which are open to the public). Moby’s pop-up, for example, is located at The Viper Room, which will host a Silent Frisco dance party on Saturday the 28. Franco’s Hollywood Forever pop-up will host a night of art and music on Monday, September 30.

Coveted booking rights for each pop-up were granted to a few Angelenos who entered an online contest, the rules of which included writing a love letter to L.A. in 140 characters or less. (You can see a list of Airbnb’s favorite submissions below.) “When it comes down to it, we really wanted this to be a celebration of L.A.,” Joffrion said.

To see all of this weekend’s pop-up locations and RSVP for events, visit Airbnb’s Facebook page.

8. On the 5: Bottle blondes, punks and cons, ideologists, Scientologists

10. Yoga on the beach, superman on the corner, only in LA

14. Proudly serving you the best looking waiters in the country. Sallie Patrick – Hollywood dreams, both realized and broken, haunt and inspire me.