Home Uncategorized Afternoon Cram: The State of Our State 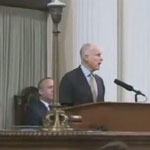 Governor Brown: California’s Budget Is Solid
The Governor gave himself a nice pat on the back in his state of the state address,
[LAT]

Richard Branson Helps Raise $2,000 For Glendale Homeless Shelter
In related news, he leant a pair of his shoes to volunteer Shannon Smith.
[LAist]

It’s Officially The Future: LAUSD Classrooms Are Getting Tablets!
The School Construction Bond Citizen’s Oversight Committee approved a proposal in a 9-6 vote.
[DN]

A Seatbelt Likely Saved A Woman Who Drove Off Mulholland Cliff This Morning
Buckle up!
[DN]

J.J. Abrams to Direct the Next Star Wars Film
So there’s going to be a 7thStar Wars.
[Variety]

Wanted: Downtown Streetcar Feedback
If you’d like to have a say in what the L.A. streetcar environmental impact report studies, now’s the time.
[LADN]

Two-Buck Chuck To Cost More Than Two Bucks
The price of Trader Joe’s-stocked Charles Shaw wine is going up.
[LABJ]