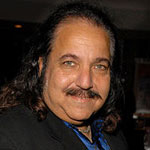 Ron Jeremy is in Critical Condition
He’s in the hospital after suffering a heart aneurysm.
[CBSLA]

Andrews Sisters’ Patty Andrews Dies at 94
The last surviving member of the singing trio was a resident of Northridge.
[DN]

USC to Build Gloria Kaugman School of Dance
She’s mum on the sum, but the “dancing philanthropist” must have donated quite a  lot of money.
[KABCLA]

Glendale Man Arrested in “Sextortion” Plot
He allegedly used social media to victimize as many as 350 women.
[KTLA]

CHP Investigating Marriage Proposal on 10 Freeway
Proposing during the 2013 Unity Ride was maybe as illegal as it was “special.”
[LAist]