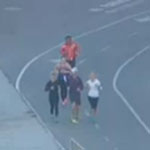 Dozens of Runners Held a Marathon To Honor Victims of the Attack on Boston This Morning
A moment of silence preceded the “Running for Boston” tribute.
[NBCLA]

Video Surveillance Leads Officials To Two Suspects in Boston Bombing
An arrest is reportedly imminent and a briefing is scheduled for 5 p.m. EST.
[LAT]

A Torrance Businessman In Critical Condition Following Boston Bombing
John Odom was watching his daughter run in the marathon when he was injured.
[KABC]

There’s a Bit of a Boom in Local Housing
The median sale price in March is the highest in four-and-a-half years.
[LABO]

Fairfax Theatre Projects Gets Unanimous Thumbs Up From City Council
Out with the art deco theater at Fairfax and Beverly and in with a mixed-use development.
[Curbed LA]

A Second L.A. Man Has Recently Died of Meningitis
Downtown resident Rjay Spoon, 30, died of the illness in December.
[LAist]

Someone Sent Ricin To The White House and the Senate
A man is reportedly being questioned by police.
[NYmag]