Home Uncategorized Afternoon Cram: Its Getting (Even More) Crowded 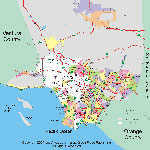 Hugh Jackman Received a Star on the Hollywood Walk of Fame
Sadly, we don’t believe he broke out into song and dance.
[NBCLA]

Possibility of Armed Suspects Puts Cal State Fullerton on Lockdown
That shouldn’t make it hard for students to study for finals at all.
[KABC]

Josh Hamilton Signs With the Angels
The 2010 AL MVP is a Texas Ranger no more.
[ESPNLA]