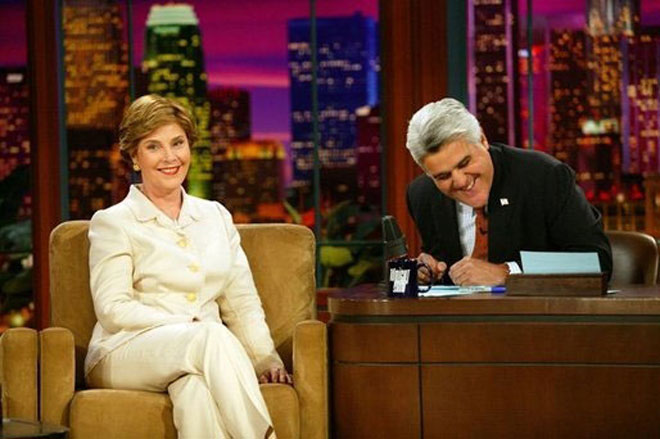 Laura Bush on The Tonight Show With Jay Leno

NBC May Be Moving “The Tonight Show” to New York
And it seems the network won’t be moving Jay Leno with it.
[Variety]

Only N.Y. Relies on Kickstarter More Than L.A. Does
Filmmakers really need money, and they’re not afraid to ask for it.
[LABO]

Singer Bobby Brown Has Already Been Released From Jail
He served 8 hours of a 55-day sentence.
[CBSLA]

Richard Riordan Is Endorsing Wendy Greuel
He’s also signed on to her campaign as a financial advisor on labor and business issues.
[DN]

Seniors From a Jewish Home Broke Unleavened Bread With Japanese-American Compatriots in Reseda
One nice reason this Passover was different from all others.
[DN]

L.A. Kings and L.A. Galaxy To Be Feted At the White House On Tuesday
The teams will host a “Let’s Move” Clinic on the South Lawn.