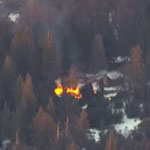 Christopher Dorner is Believed to Be Surrounded
Following a shootout, the Big Bear cabin where the fugitive was holed up is on fire.
[LAT]

Governor Brown Overrules State Parole Board Ruling on Robert Butler
The convicted double murderer will not be released on Friday after all.
[DN]