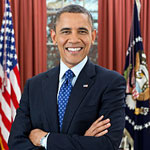 Obama is Coming To L.A. in Early June
Consider this your early sig-alert.
[LAO]

Northridge Kidnapping Suspect Captured in Mexico
Tobias Dustin Summers was arrested at a drug and alcohol rehabilitation center south of the border.
[LAT]

Zach Braff Is The Latest Big Name To Ask For Project Funds On Kick-starter
He’d like $2 million in 30 days to produce a drama, to be exact.
[Variety]

Women Mistaken For Christopher Dorner By Police Have Settled For $4.2 Million
They were fired at by police officers during the manhunt.
[LAist]