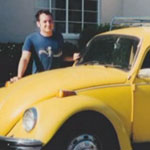 Google Maps Helped A Man Locate His Stolen Yellow VW Beetle
The Internet can be used for good.
[KABCLA]

In His Last State of the City Address Mayor Villaraigosa Counted His Achievements and Criticized Wendy Greuel and Eric Garcetti For Not Discussing Education More
Now an education-themed debate is being discussed.
[LAT]

Film Production on L.A. Streets Is Up
That makes two quarters with double-digit increases to location filming.
[LAT]

It Was A Record Breaking Day on Wall Street.
Again.
[LABO]

Police in Long Beach Are Looking For a Bike-Riding Groper
He must be good at cycling hand-free.
[NBCLA]

Broad Stage Announces New Fund For Original Works
They’d like to get a little “funky” with it.
[SMDP]

Suze Orman Has Some Ideas For Students Tackling Loan Debt
She shared them, with L.A. Congresswoman Karen Bass, in D.C. yesterday.
[SCPR]

The Lakers Beat the Hornets
Playoff hopes are alive!
[ESPNLA]