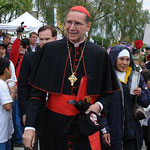 Pitcher Sandy Koufax Goes Back to the Work for the Dodgers
The 77-year-old Hall of Famer is the new special advisor to Dodgers chairman Mark Walter.
[NBCLA]

Inauguration Party Held at Grand Park Downtown
What, you thought all the fun was had in D.C.?
[DN]

The L.A. Kings Are Back
Better late than never, although defenseman Matt Greene is on injured reserve.
[ESPNLA]

Southwest Will Soon Have All of LAX’s Terminal 1 To Itself
US Air is moving on down to Terminal 3.
[LAO]

Developer Buys Lincoln Blvd. Property For About $11 Mil
The lot where Wertz Bros. Antique Mart is will become part of an apartment complex.
[SMDP]