Home Uncategorized Afternoon Cram: Brad Pitt’s Thanksgiving Was Not As Delicious As Yours 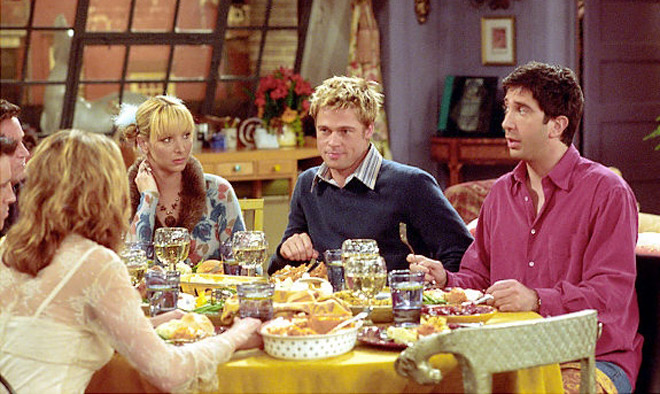 Brad Pitt enjoys Thanksgiving diner on an episode of Friends.

Richard Riordan Abandons Bid to Get Pension Reform Measure on May Ballot
Discouraged by a December deadline, the former mayor is no longer after your signature.
[LAT]

A Cessna Crashed at a Cal State Northridge Soccer Field on Sunday
A man and a woman were treated for injuries.
[NBCLA]

Alleged Murderer On FBI’s Most Wanted List Arrested, Brought to L.A.
Jose “Joe” Luis Saenz has been on the lam for more than a decade.
[KABC]

Innocence of Muslim Filmmaker Breaks His Silence, Says He Has No Regrets At All
It may be best to stop talking again.
[LAist]

Construction on Sepulveda Pass Begins Today
Now that everyone’s back in town.
[LADN]

3.5 Million Viewers Tuned in to “Liz & Dick”
A mild disappointment, for Lifetime and viewers, apparently.
[Variety]

Brad Pitt Didn’t Know It Was Thanksgiving
He must not be on Instagram.
[People]