Home Uncategorized Afternoon Cram: AEG Is Off The Market 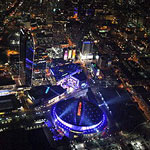 AEG Is No Longer For Sale
Also: Dan Beckerman will replace Tim Leiweke as president of the company, and the dream of Farmers Field lives on—but barely.
[Fishbowl LA]

Roger Mahoney Does Not Regret Participating in the Papal Conclave
“Dozens of cardinals came up to me and thanked me.”
[KABC]

Two Workers Got Stuck in A Trench in Pacific Palisades
Crews are working to free them now.
[DN]

A Shark Filmed In a Van Nuys Pool For a Kmart Commercial Has Died
The spotlight (and other factors), it seems, was unbearably stressful for the scary swimmer.
[LAist]

Dahntay Jones Says He Really Didn’t Mean To Injure Kobe
Bryant’s not so sure.
[ESPNLA]