Home Uncategorized Afternoon Cram: A Holiday Bonus From the MTA 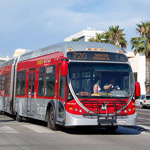 County Buses and Trains Will Be Free on Christmas Eve and NYE
Happy holidays from L.A.’s MTA!
[LAist]

New UC Logo Getting Cold Online Reception
Looks like the Internet is still the Internet.
[LAT]

More Than 2000 Students Compete in LAUSD Band & Drill Team Championships
“It’s not as easy as it looks.”
[LADN]

More People Moved From California Than Moved To It From Another State In 2011
But, more people than that moved to California from another country.
[LABO]