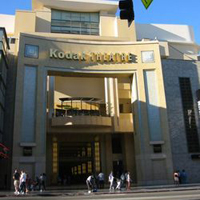 After almost a decade at the prestigious Kodak Theatre in Hollywood, the Academy of Motion Pictures Arts & Sciences is discussing moving the Academy Awards to another venue.

The Academy’s long-term contract with the CIM Group, which owns the Kodak, allows the Academy to explore better offers at other venues after the 2013 show, according to the Hollywood Reporter.

A member of the Academy’s board of governors told the paper the Oscars may ultimately stay at the Kodak if a better lease is not negotiated elsewhere.

Although a rumor that the Academy was in talks with Nokia Theatre circulated this week, a statement was released Wednesday saying: “The Academy has not begun venue negotiations for the Oscar telecast beyond 2013.”

The first Academy Award show was held in 1929 in Hollywood and has since made stops in several venues, finally calling the Kodak home in 2002. Although the Kodak was designed and built to accommodate the award show comfortably, a move to the Nokia would come with some perks.

The Nokia can seat 7,100 people, more than double the capacity of the Kodak. The LA Live complex, where the Nokia is located, is also equipped with more facilities and could host more outdoor activities for the award show.

The City of Hollywood would be financially hurt by a move, as the home of the Academy Awards is one of the area’s biggest draws for tourists.

This year’s award show, the tenth to be held at the Kodak Theatre, will be held on Feb. 26.