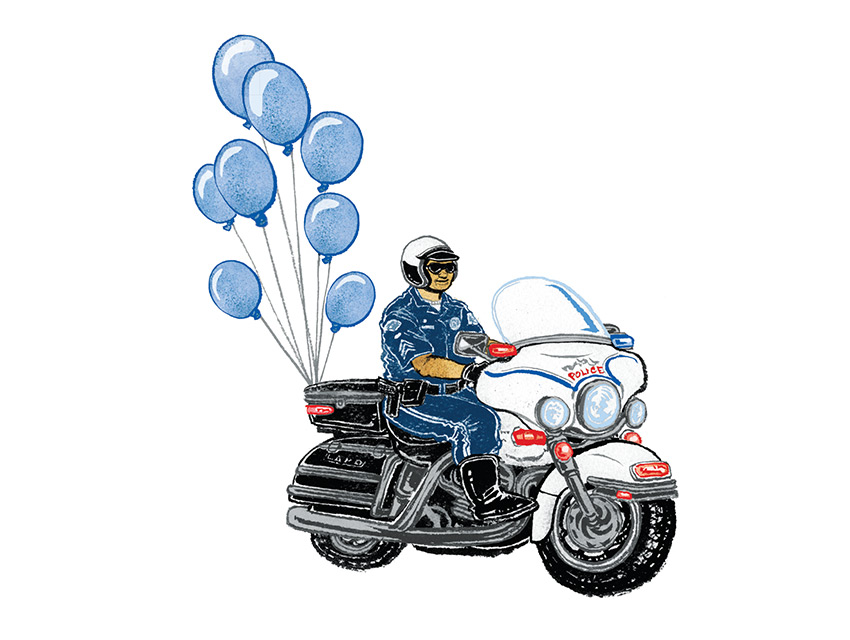 You might call it ‘the Riots of 1992,’” says Johnnie Raines III as we pull up to Florence and Normandie on a cold evening. “I call it ‘the Rebellion.’” Raines is 65, a retired aerospace worker who lives in Leimert Park and cochairs the civilian Southwest Division Community Police Advisory Board. “This was about people standing up against a law enforcement system that unjustly enforced the laws,” he continues. “In ’92, we were angry because things weren’t changing. I watched Watts burn down when I was a teenager. Twenty years later citizens were still being assaulted by police for no reason besides being black.”

As we idle in the darkness of a 76 gas station, Skipp Townsend, a former gang member who served seven years of hard time before becoming a gang interventionist, pipes up. “Back then it wasn’t good guys versus bad guys, like it is now,” Townsend says. “It was citizens versus police.”

This is perceived wisdom in this part of L.A., just as it was in ’92. What’s different is that the third black man in our van agrees with the others. And he’s a cop. Sergeant Jimmie Barlow, with the LAPD since 1985, is sitting stiffly in his uniform. “I concur with all that,” he says quietly. “Even before the Rodney King verdict, you knew something big was going to happen.” Not only was Barlow “shocked” by the acquittal of his four fellow officers in Simi Valley, but he also knew the community was on edge after the Latasha Harlins shooting, the beating of King, and the generally hostile relations between police and the bottom half of L.A.

Who knows what ostracism or scorn or worse Barlow would have faced for voicing this sort of heresy during the reign of Chief Daryl Gates—even his white partner from Southwest Division at the time was astounded by the violent outbreak that Barlow took for granted. But nowadays Barlow’s acceptance of the LAPD’s responsibility in 1992 is part of the training narrative of a police department that has experienced a radical shift, not just in its racial makeup but also in its official company line. This frank conversation takes place inside an LAPD van, on a press visit that the department’s central command set up for me.

“Police aren’t the problem today,” Raines says. “They are our partners.” Raines’s positive assessment of the LAPD is hardly an aberration. A 2009 study by Harvard’s Kennedy School revealed that the majority of Angelenos believe most LAPD officers treat them, their friends, and family with respect. A staggering 83 percent of city residents said the LAPD was doing a good to excellent job.

Under Gates and his predecessors, the department had succumbed to what policy wonks call the Nash equilibrium: two opposing players who believe they have nothing to gain by changing their strategy. Through the ’90s, the department conducted itself like an occupation force: an elite paramilitary unit under siege by a violent enemy. The main strategy for tackling drugs, gangs, and street crime was suppression. Curfews, night raids, gang injunctions, street sweeps—all were implemented with zealous and often reckless use of force. No matter that much of this was tinted with overt racism. The officers who took this combative approach were quickly promoted. The events of 1992 did not signal to Gates or the LAPD’s middle brass that the suppression strategy wasn’t working; it signaled that this was war.

Reform came despite a thicket of feckless city pols, the disappointing administrations of chiefs Willie Williams and Bernard Parks, and the Rampart fiasco. Ultimately outside pressure, a federal consent decree, and an increasingly enlightened leadership remolded the siege mentality of the LAPD. Even his harshest critics will acknowledge that the tenure of Chief William Bratton codified the changing dynamic inside the LAPD, though there were setbacks like the 2007 May Day melee (after which Bratton delivered severe disciplinary reprimands and masterfully managed damage control).

The dizzying shift in the racial diversity of the department has also helped it transform from what could seem like an occupying army into something more like a community agency. In the 1980s, about half of the academy’s graduates were white and many ex-military. Today Latinos have grown to 42 percent of the force, blacks to 11 percent, and Asians to 7 percent; whites are down to 35 percent. Women make up 19 percent of the ranks and are expanding. Gays and lesbians are aggressively recruited.

“I took this job because I wanted a real career and something challenging,” says 33-year-old officer Diana Figueroa as I chat with her and two other Latina officers inside the LAPD’s new headquarters on 1st Street downtown. Figueroa’s persona is far from the stereotype of a big-gutted ex-Marine rolling through South-Central as if it were Da Nang. Figueroa was working in a Washington Mutual call center when she decided to apply to the Los Angeles Police Academy. Like many of the city’s residents she polices, her parents were born in Mexico and her Spanish is fluent. “Speaking Spanish is a great advantage,” she says. “Especially being able to explain to people in their own language what the laws mean.”

She says she was particularly impressed by the way the department quickly retooled its training on crowd control, community outreach, and restrained use of force in the wake of the May Day confrontation. “We learned a lot from that,” she says, pointing to the relatively painless eviction of the Occupy L.A. protesters earlier this year. “For Occupy the main priority was to keep people safe rather than just clear an area.”

Only the most naive would believe that the LAPD has morphed into a 9,900-member kumbaya choir, but the trend toward racial and ethnic balance in the department is as unstoppable as the tides. Challenges remain. There are still too many incidents of excessive force. While Chief Charlie Beck has been following in the footsteps of Bratton, nobody knows how much deeper he will go in reshaping the department culture. This much is clear: At a time when social programs and spending on the poor are issues, no serious social observer rules out the possibility of another explosion. Whatever one thinks of the police, they are the ones who clean up after failed or nonexistent social policies.

As we sit in the LAPD van at Florence and Normandie, gang interventionist Townsend has a mixed view of what lies ahead. He’s hopeful about the force and has the cell phone numbers of four officers on his speed dial. He has nothing but admiration for the Southwest Division leader, Captain Melissa Zak, whom he credits for “humanizing” relations with her civilian neighbors. “The problem is, our kids have no jobs,” he says. As part of a community nonprofit effort, Townsend helped 70 adults last year find jobs as electricians and construction workers. But that’s just a drop in the bucket, he says. “We train so many people with job skills, but who is giving anybody any jobs?”

Sergeant Barlow glumly agrees. “Look at those 16- and 17-year-old kids around here who get it together and stay away from crime,” he says. “There are no jobs waiting for them in or around the community. It takes away hope.”

“I was in a shoot-out here, on the first day of the riots,” Barlow says as he cruises north on Vermont. “You know how you see pictures of children in war-torn countries with their villages burning behind them? That’s what I felt like in ’92. Powerless and very sad to watch my village burn.”

Natasha Vargas-Cooper is a journalist based in Woodland Hills.