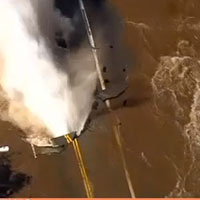 The LADWP is working hard to mend a water line break that has been filling Sunset Boulevard and parts of UCLA with thousands of gallons of water since around 3:30 Tuesday afternoon. According to the mayor’s office, the water main is a 30-inch, 90-year-old riveted steel pipe, and water flow through the pipe is estimated at 75,000 gallons per minute when operational. Multiple news sources have reported people were evacuated from parking structures at the university, where Drake Stadium and Pauley Pavilion are currently experiencing flooding. Shortly before 5:30, mayor Eric Garcetti said in a statement that he is monitoring the situation  and is “in constant contact with key city departments including the LADWP, LAFD and LAPD, along with UCLA.” For now, Sunset is closed in both directions between Marymount Place and Westwood Plaza and is not expected to reopen for several hours.

Pipe in Westwood is from 1912. Being shut down now, but will take an hour to prevent shock to system and further damage.

UPDATE 7:45 p.m.: LADWP crews have completed shutting off the water to the ruptured pipe.