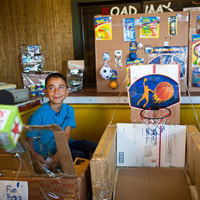 Nirvan Mullick, the filmmaker whose short documentary about a 9-year-old boy who created an arcade in the back of his father’s East L.A. auto parts store became a YouTube sensation last month, tells us what his young star is up to now (in fact he’s setting up shop at the Hammer Museum today) and how “Caine’s Arcade” has changed his life.

It’s been about a month since your film, Caine’s Arcade, went viral. How are you?
Good! It’s just been crazy.

There’s a marketing theory that says if nobody know that you exist, you don’t. How were you so successful at getting your story heard when so many videos are posted online each day?
Well I have a creative agency and I do media strategy for brands and non-profits, so early on I told Caine that I was going to take him on as my pro bono client and try to get the word out about his business. He thought that sounded great. In preparing the flash mob there was an opportunity to engage people online to help make it a success. It came down to describing what Caine had done, why it was special, why we wanted to make his day, and how people could help. When the film finally came out there was already a group of people rooting for Caine.

But to be honest, when I made the film everyone thought it was a little too long to go viral. People were suggesting I cut things to make it possible for the film to get more views online. I didn’t want to do that.

Why not?
My priority was to document Caine’s Arcade and to bring the ideas that he had invented into the world. I came to peace with the fact that this would not be a viral video and that my priority was to tell my story at the length I felt it needed to be. Even if it cost hundreds of thousands of views, I was not going to cut the calculator scene, because Caine invented it and I thought that was awesome.

You posted the film with the goal of raising $25,000 for a scholarship fund and hit that number almost over night. Were you surprised?
We thought the bar was too high! My girlfriend was saying, ‘Are you sure you want to reach for that much money?’ I figured if we come up short and raised $10,000 or $100… it was a no-loss risk.

How did it feel to get such a positive response so quickly?
I went to the climbing gym right after I posted the video, and after I went climbing I looked at my phone and my messages had just blown up. There were over 500 messages with donations. We were all shocked. I went to bed and we had raised $6,000 and I woke up the next day and we were at $16,000. It was incredible. It was affirming that the same feeling Caine had given to me, the film was succeeding in giving to other people.

I didn’t sleep the first 48 hours, there was so much to do, and I still haven’t caught up. I missed an e-mail from The Tonight Show  for three weeks. I just didn’t see it.

Not too many people can say they were too busy to see an email from Jay Leno.
It wasn’t that I didn’t want to! I was surprised to see the impact the film had—how fast and how quickly it grew and how positive the response was. I think that was the most surprising thing, that there wasn’t any negativity. It’s a glimmer of sunlight.

You’ve started a foundation with the donations you’ve received. How much money has been raised so far?
Let me check. $198,738.66.

Wow. And what will Caine’s Foundation fund?
The foundation’s mission is to find, foster, and fund creativity and entrepreneurship in kids. We’ve started a school pilot program with over 50 schools around the world registered to hold a Caine’s Arcade Week, where kids will build arcades and learn all kinds of skills, from math to business to marketing to arts and crafts and engineering.

Have you seen Caine lately? What’s he up to now?
We see each other every weekend. He was just presented a Latino Spirit Award by the California State Assembly and this weekend he’ll be at the Unique L.A. trade show. We talk about what all this has been like, how crazy it has been, and his business. He’s just started to make wallets out of duct tape, so he’s on to another endeavor.

How has Caine’s father responded to the film and its success?
The first time he saw the film he was in tears. He’s super proud, although it’s been difficult on his auto shop business because now he is so busy working for his son. He’s kind of in the arcade business now.

Will Caine’s Arcade be open for business this summer?
It’s up to Caine. There’s been talk about a summer tour if Caine wants to do it.

And what about you? Will you go back to making films, or have you decided to focus on running Caine’s Foundation?
I’m hoping to get the foundation off the ground and get a CEO with experience in that space to run it. As a filmmaker, so many incredible doors have opened up for me. I am represented now by the William Morris Endeavor agency and there’s a lot of interest from studios, major game platforms, book publishers wanting to do children’s books—even a Broadway musical is being discussed. Movie stars and directors are emailing me wanting to know what the plan is.

So what’s the plan?
Well, I’m most excited about doing a feature film version of this story. I want to show how these people have bled into each other’s lives and how this chance encounter has changed all of us and is making a lot of our dreams come true.

You’d get to spend a lot more time with Caine.
Yeah, and that’d be great. I think Caine and I are going to be buddies for a long time.