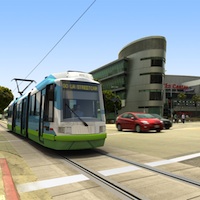 Share
Email
Facebook
Twitter
Pinterest
ReddIt
Los Angeles’s latest transit-based project, an urban streetcar system that would serve a four-mile section of downtown, was approved for funding by the City Council on Friday. LA Streetcar Inc., an advocacy group determined to make the project a reality within the next five years, estimates an additional 9,300 jobs, $125 million in private investments, and $24 million in tourism spending will be generated by the streetcar system. The largest private contributions to the project so far have been from sports and entertainment mega-developer AEG, the same company responsible for L.A. Live, Staples Center, and the proposed downtown NFL stadium. Construction plans have not yet been announced.