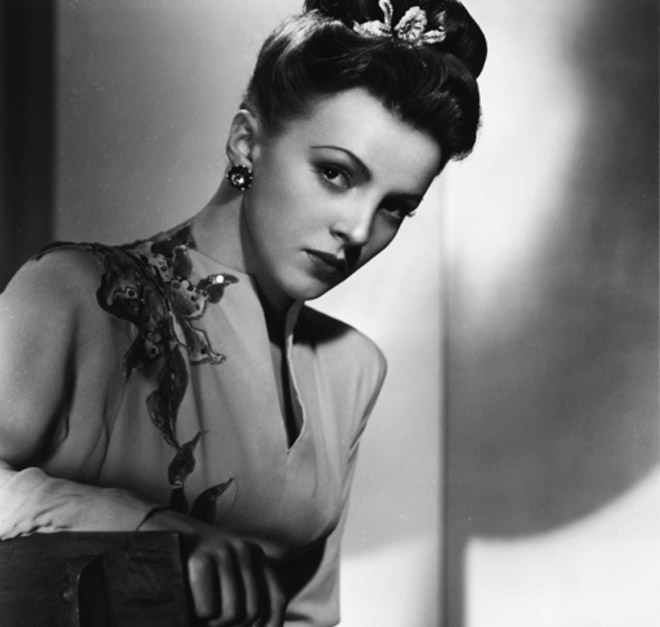 Marjorie Massow was an Iowa City girl but she didn’t want to be one all of her life. She had big dreams, so she moved to Hollywood to make them come true. In 1944, she was plucked out from behind the cash register at the 20th Century-Fox commissary and cast for a role in Take It or Leave It.

By 1946 Marjorie had adopted the stage name Madge Meredith and was working for RKO. She was cast opposite Tom Conway in The Falcon’s Adventure, and appeared the following year in Trail Street with Randolph Scott, Robert Ryan, and Anne Jeffreys.

On July 2, 1947, Madge was in the headlines, but not because she was starring in a film; the actress was being sought for questioning in a kidnapping case.

Nick Gianaclis, Madge’s business manager and a restaurant supply man, had filed a complaint in which he said that he and his bodyguard, Verne Davis, had been kidnapped, beaten, and taken out to Lopez Canyon from where they had managed to escape. According to Gianaclis, he and Davis had caught the man who was watching them off guard and relieved him of his weapon. They ran to a ranch house and called the cops.

In Nick’s statement to Capt. W.T. Deal and Det. Sgt. S.W. Robinson of the L.A. County Sheriffs Department, he said:

“About 9 a.m. Monday, Davis and I were on the way to work. When we reached the bottom of the hill at Laurel Canyon Road, we met Marjorie Massow driving a new maroon convertible. She motioned to us to turn around and follow her up the hill to the house. So we did.”

The house to which Nick referred in his statement was in the Hollywood Hills, and it was at the center of a nasty dispute between Madge and him. About 200 yards from the house, Nick told officers, the actress turned her car to block the road. Gianaclis said that when he stopped, a third car drove up behind him.

“There they are! Go get them!” Nick quoted Madge as saying.

Three men got out of the car to the rear, Gianaclis said, and while two of them covered the victims with guns, the third administered a beating with a blackjack.

“We were ordered into the rear of the car,” Gianaclis said, “while we were being driven about for more than an hour, we were struck from time to time–just about every time we moved. When we finally stopped in a hilly area, the man called Jim taped our eyes. Then they made us crawl over some rocks and through heavy brush. They left a guard to watch us.”

A warrant was issued for Madge’s arrest. When she was questioned, Madge told a tale that was quite different from the statements given by Gianaclis and Davis. She said that Nick had threatened her many times about the ownership of the house, and that he had arranged a meeting in the Hollywood Hills on the day of the kidnapping to discuss the property rights. Madge told the police that on the way to the meeting, as she was driving up the steep, winding road, she became frightened when she noticed that she was being followed by a car driven by Nick. When she reached the meeting place in Laurel Canyon, Madge said that Nick forced her automobile to the curb. She attempted to escape, she said, but he threatened her with a length of pipe.

Madge was called to testify about her dispute with Nick over the house. “I fell in love with the house, but was $5,000 short on the purchase price,” Madge testified. “I called on several of my friends for aid and finally Nick said he would put up $5,000 to complete the transaction. I took out two life insurance policies to protect Nick’s investment.” Madge testified that Nick had duped her. He’d gotten her to sign a deed to the house—not a mortgage—so that he would be part owner. She’d trusted him, she said, and he had betrayed her.

Madge said she was “scared to death” after Nick threatened to “get her” over the lawsuit involving the home on Magnolia Drive in the Hollywood Hills.

The kidnapping trial lasted for four weeks. On December 12, 1947, the jury of 11 women and 1 man returned guilty verdicts for each of the defendants. Madge was found guilty of five felony charges involving the kidnapping of Nick. Two of her co-defendants, Albert Tucker and Damon Klinkenberg, were also convicted. A fourth defendant, James Hatfield, the former Beverly Hills cop, was found guilty only on the possession of a deadly weapon charge.

Madge said she had been framed. She was remanded to County Jail pending a new hearing, but the motion for a new trial was denied.

Madge vanished from the newspapers and the public consciousness until March 1951, when the parole board of the California Adult Authority recommended her for release from prison. Normally she would not have been eligible for parole for another two years, but the board had examined Madge’s case and concluded that she had been the victim of a miscarriage of justice.

The California State Assembly took an even stronger stand in Madge’s case than the parole board had done; they charged that the trial had been a mockery and that she had been railroaded to prison!

The Assembly report supported Madge’s claims of innocence, in particular her assertion that she’d been framed by Nick. They also felt that she’d been poorly represented in court.

Albert Tucker, one of Madge’s co-defendants, had made a new statement in which he said that Nick Gianaclis planned to implicate Miss Meredith as a means of forcing her to return to his “domination.” Tucker said that the married Gianaclis had a “personal affection” for Madge, aside from regarding her prospective “lavish income” from movie contracts.

An application for clemency, either for a pardon or for time served, was filed on Meredith’s behalf.

There were two men who worked diligently behind the scenes for two years to see that Madge got justice — Herbert Schofield (71) a retired banker, and Charles E. Wilson (68) a real estate man. At their own expense and on their own time the two amateur detectives interviewed people involved in the case, and they even visited Madge a dozen times in Tehachapi to get the information they needed to crack the case. They were successful.

On July 14, 1951, Governor Warren ordered that Madge Meredith be released, just in time for her 30th birthday, from Tehachapi. The governor commuted her sentence of five years to life to time served. Madge had spent two years, two months and five days in prison, and she had been held in County Jail for 11 months prior to going to Tehachapi.

Governor Warren said: “This is a bizarre case, perhaps more fantastic than any moving picture in which the defendant acted — but certainly having many of the attributes of a scenario.”

Following her release from Tehachapi, Madge renewed her suit to gain ownership of the house in the Hollywood Hills from former manager Nick Gianaclis — and she was successful.

Madge returned to her career as an actress, and over the years she appeared in several films and many television shows, from Cowboy G-Men to Sea Hunt.  Madge’s last credit was for a television series, The Littlest Hobo, in 1964.