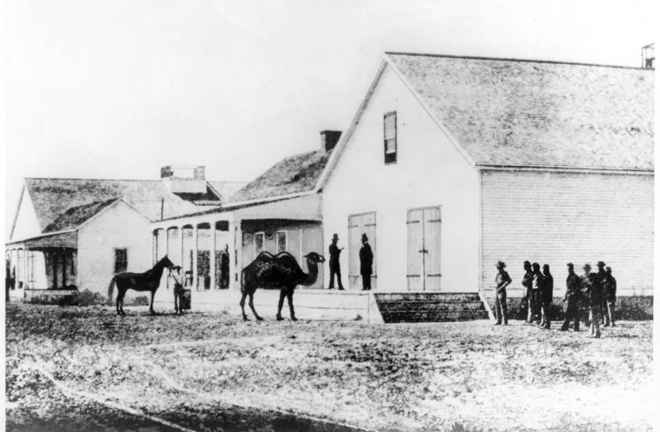 A U.S. Army camel stands outside the Drum Barracks at the Wilmington harbor. Note that while Arabian camels have only one hump, the artist who touched up this photograph mistakenly added a second hump to the camel's back.

It was a spectacle no Angeleno had witnessed before: a caravan of fourteen Arabian camels ambling through the streets of Los Angeles. Arriving in town January 8, 1858, the humped and hoofed animals represented an ambitious U.S. government experiment to introduce the so-called “ship of the desert” to the arid lands of the American Southwest. They arrived under the supervision of Edward Fitzgerald Beale, a surveyor under contract with the War Department to open a new road between Texas and Southern California.

Several years earlier, Secretary of War Jefferson Davis had conceived the scheme, convinced that the famously hardy beasts of burden would improve transportation through the nation’s newly acquired desert lands. Purchased in the mid-1850s from Mediterranean ports at the total cost of $30,000, the camels spent most of their time in government service around Southern California, hauling freight for rancher Samuel Bishop near Gravevine Canyon and helping to survey the California-Nevada border.

Though their endurance was a virtue, their hooves were not well adapted to the rocky soil of the Mojave Desert. When the Army tried using the camels for express messenger service, several of the animals—built for long journeys but at a slower pace—collapsed and died.

As the Civil War broke out, the government considered the fate of the camels. From 1861 to 1863, more than 30 of the exotic dromedaries mingled with government mules at several Los Angeles-area Army posts, from Camp Latham in present-day Culver City to the Drum Barracks in Wilmington. By the time the Army auctioned off the remaining herd in February 1864 for less than $2,000, the government had acknowledged the camels a failure, while their champion—Jefferson Davis—was waging a losing war as president of the Confederate States.