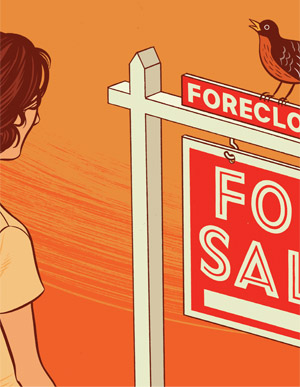 A year ago, I couldn’t drive my not-very-wide Westside street without navigating around, at a slow, grumpy crawl, outsize vehicles of one kind or another. There were cement mixers and flatbed trucks with rolls of new lawn, vans of electricians and plumbers and painters. Big aromatic lunch coaches trolled up and down. The whole area was in a frenzy of destruction and construction, houses being renovated or torn down, lot-line-to-lot-line behemoths going up where cottages once stood. The decibel level was intense, a grating symphony of jackhammers and buzz saws, the sound of new money hard at work. We complained about the noise, the traffic, the transformation of our once modest neighborhood. Hunkered down in our 1,400-square-foot bungalow, we scowled out at these huge homes, their footprint, their skyprint. We were being surrounded. Granted, the building-renovating mania had been in good swing for years. But in early 2008, the craze hit a high pitch, at least where I live.

Now it is over. It feels as if someone reached up and turned the cosmic volume dial way low. There are a few stray projects being finished, a few tenacious taco trucks lumbering by on any given noon. But in general, the construction circus seems to have left town. A hush has settled over the land. I hear birds again, a sprinkler going on, kids playing in the yard across the way: forgotten suburban sounds. The change is dramatic—as if someone not only lowered the decibel level but also turned back the clock. The whole city feels that way to me: quieter than it has been in a decade, probably two. I’m moving around more freely than I have for years, able to meet friends in town for dinner midweek, a trip until recently I would never have attempted, given the traffic. A last-minute call to a favorite restaurant is not met with a “sorry, impossible” but rather with a “yes, come right over.” Even on a Saturday night. The hustling, trendy tone—buy this, try that, have you been here, been there—is gone. People are digging in, even at the higher economic end. The bubble has indeed burst, as it has throughout the country. But in this great, thrumming metropolis that drop in activity feels pronounced.

I didn’t think such a thing possible, and I am finding it difficult not to celebrate a bit, just as I am hoping we have seen the end of the preening mansionization craze that came close to destroying the soul of my pocket of the city—and other pockets, too. But the celebration is, of course, tempered with mean reality. What I see as a city restored is a lost job to someone else. These days people knock on the door—carpenters, chimney cleaners, tree trimmers—looking for work, a floating tribe of the scared and enterprising. It used to be you had to wait for their services. No more. All over L.A., people are scrambling. There are lines at job fairs, at unemployment offices, at soup kitchens. Though many of us don’t actually see those lines on any given day because everything is so spread out, we know they are there. We can feel them.

There are still groups of men in front of the local building supply stores, waiting to get picked up for a day’s work. But the corner clumps of laborers have otherwise thinned out. Their absence is eerie. Where did they all go? I ask myself this as I look around a deserted restaurant or store or even the supermarket or veterinarian’s office. Where is everybody? Where are their dogs, their cats? My pleasure at the newfound ease—of getting a reservation or an appointment for anything within hours—and attendant lack of noise and crowds is constantly checked by a sense of concern and disorientation. Hello, hello. Are you out there? Are you OK?

They are not OK. Every day there is a story from the recessionary front. A psychologist friend tells me her practice has swelled with out-of-work professional men. She now runs a group for them. “I have never seen men hold each other,” she says, “but these guys do.” The same day, I get an e-mail from an old friend trying to place two rambunctious Labs, because the people who own them have lost their house and have to move into an apartment, three kids in tow—no dogs allowed. The children are bereft as the parents desperately try to get their canine duo adopted together. The same day, a lawyer friend tells me her firm is laying off more people, not just staff but attorneys with years of employment, while another friend tells me her niece just lost her teaching job. On and on and on.

I hated what was happening to this city I so love over the past couple of decades: all the amped-up acquisitiveness, the out-of-control building, and the untenable traffic. To my native eyes, this is such a wild and beautiful place, and we were in great danger of ruining it completely. There are those who think we have. Though I share some of their sentiments, I remain stubborn in my civic affections. I see beauty around me as I walk the streets where I live or hike in one of the nearby canyons. We didn’t ruin it all, I mutter to myself with gratitude. There are still some untouched corners, some smaller houses that didn’t get razed, some funky, original touches of the Los Angeles of my childhood. The spree, it would seem, came to a halt in the nick of time.

But there is so much human wreckage, and how can one be happy for that? Is there a middle ground? Can we gear back up, when the economy rights itself, and make saner decisions about how to live here, what to preserve, what to fight for? What would that Los Angeles be like? What would that mean? Could we keep the intensity level sane, the traffic, the indiscriminate building, the conspicuous consumption? Would the haves, chastened by their losses, be more mindful of and generous to those who have much less?

For better or worse—rather better and worse—the Pause button has been hit. This city, with its disparate sections, its extreme divergence of wealth, its gridlock, has a chance to rethink itself. That might seem counterintuitive, but what better time for a little planning, a little audacious grappling with what ails us? I won’t hold my breath.