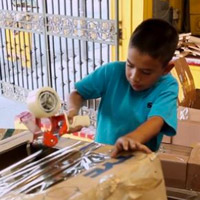 Nearly half a year after surprising Caine Monroy, a 9-year-old boy who had turned a heap of cardboard into a makeshift game room in his father’s East L.A. auto parts store, with a flash mob and turning his story into a YouTube classic, Nirvan Mullick is making us feel good again. The filmmaker behind Caine’s Arcade tells us about the October 6 event he’s planning to promote creativity worldwide and why he’s now working with the city to open a play space for kids in Boyle Heights.

How’s Caine?
Caine’s great. He turned ten last month. His birthday was on a Wednesday and we went go-karting at Racer’s Edge. He actually wrote an amazing essay about getting older. It’s quite beautiful. He says he’s excited about turning double digits but he’s not looking forward to getting slow like his grandpa. It’s adorable.

Caine definitely looks different than when I first met him and filmed him. I have a little marker over at the arcade where we are seeing how tall he is getting. He’s outgrown two staff shirts, so we bought him a boss shirt. He’s also more articulate now and a little bit more who he wants to be when he’s older.

How’s the arcade doing?
Caine’s running the arcade mostly on Saturdays and people are still showing up. Maria Bello just came with her son and a soccer team. Caine’s happy when he gets any customers. Somebody with Maria’s group showed him a version of a soccer game where you roll a penny and use cardboard to flick the coins. Caine was super into that.

Are plans for a feature-length version of Caine’s Arcade still in the works?
It’s still going to happen, but I chose to work on Caine’s Foundation first. I have limited bandwidth, and I’ve been spending all my time getting this foundation off the ground.

How much money has the foundation raised so far?
We are up to $215,000 and we have a $250,000 matching challenge grant from the Goldhirsch Foundation. People are now raising money with the Global Cardboard Challenge.

Tell us about the challenge. It sounds like fun.
It’s a launch event for the Imagination Foundation [previously Caine’s Foundation]. Basically we’re inviting the world to build anything they want out of cardboard and imagination, and then to celebrate the flash mob we did at Caine’s Arcade last year, we’re having a global day of play where people can come out to Cardboard Challenge events and display or play with the different creations that everybody’s made. There are already over 100 events in 25 countries planned. We’re holding one at Caine’s Arcade and inviting kids from local schools to come and bring the arcade games they make and the public is invited to come and play and partake in our High Five Parade. It’s a parade where the kids get celebrated for their creativity.

Are there prizes?
There might be. We are still putting the details together, and people are organizing their own Cardboard Challenge events their own way. I just saw that one school is giving whichever class in the school makes the most games an extra recess. That’s a pretty cool prize.

Can adults participate, too?
Absolutely! You can be an 80-year-old kid as far as I’m concerned.

I heard you’re looking to build an Imagination Maker Space in Boyle Heights. What’s that?
They’re spaces in underserved communities where kids can learn how to do hands-on printing, take their toys apart and put them back together, and crafting with a technical spin. We want to raise funds to build the first Imagination Maker Space in Boyle Heights. We’ve been talking with the city and some architects and are developing plans.

One year has passed since you filmed Caine’s Arcade. How do you feel about what you’ve achieved since?
I feel proud. It’s an amazing opportunity mixed with pride and exhaustion. There have been so many sleepless nights and there’s just this inspiring, tremendous response and a sense that here’s this chance to do something that really matters. It’s been dramatic. I’m really proud of what we’ve been able to do in a short amount of time. Not everything is working exactly the way we want it to, but we’re doing what we can with what we have, similar to what Caine did with his arcade. We’re just putting it out there and inviting people to play. You know, my father actually passed away on Caine’s birthday. It’s nice that he was able to be there for this part of my life.