Home Uncategorized A Non-Runner’s Guide to the L.A. Marathon 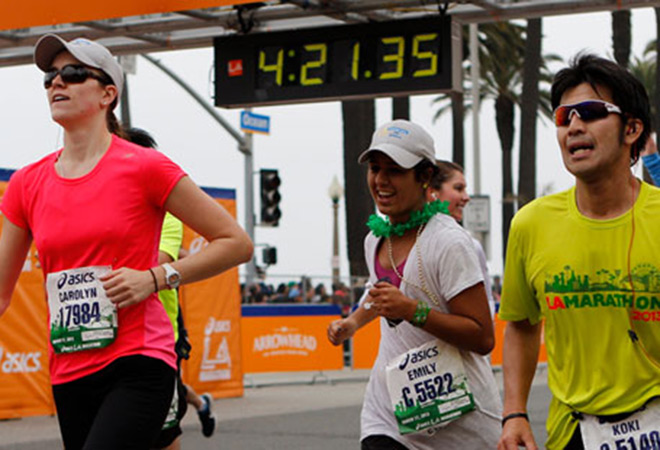 In a city where any matter of public inconvenience is expressed in apocalyptic terms (Carmageddon, Jamzilla, Stormpocalypse, etc.), there is surprisingly little worry over the L.A. Marathon’s street closures. Maybe civic pride in the L.A. Marathon has hushed potential complaints, or maybe some Angelenos aren’t worried about street closures since they’ll still be in their pajamas by the time the roads reopen (streets near the downtown area will reportedly begin reopening as early as 9 a.m.) But many streets, mainly on the Westside, won’t be open to travelers until the late afternoon or early evening.

The marathon starts at Dodger Stadium and follows a course through Los Feliz, Hollywood, and Beverly Hills on its way to Santa Monica, where most streets should be traffic horse-free by around 5 p.m. (although parts of Ocean Avenue and 4th Street are in danger of staying closed until 9 p.m.). East of the 405, the course winds through Sunset, Hollywood, and Santa Monica Boulevards. West of the 405, San Vicente will take the brunt of closures. The interactive map below gives a detailed overview of streets non-runners will and won’t be able to use:

Daunting, isn’t it? We say ditch the car and make a day of the marathon festivities—you know, that whole, “when life hands you lemons…” thing. Besides, there will be other stuff to do on Marathon Sunday aside from partaking in the grueling main attraction: over 25 locations along the course will have live music, and spectator zones offering swag giveaways, dance contests, and comedy will be set up along Santa Monica Boulevard at the intersections of Nemo and North Crescent Drive. Spectators can make themselves useful at the Arrowhead Hydration Zone at mile 16 along Santa Monica Boulevard, where they can provide water and motivation to runners as they pass.

Non-runners can also test the theory that endorphins are contagious at the Finish Festival, which runs from 9 a.m. through 3 p.m. near the finish line at the intersection of Ocean Avenue and 2nd Street. A Michelob Ultra Beer Garden will have free beer for runners, which may or may not be the day’s best incentive. Sadly, onlookers will have to buy their own beer, but it’s a small price to pay to be part of one of L.A.’s most grand events.