Home Uncategorized A New Way to Volunteer: All Aboard the Do Good Bus 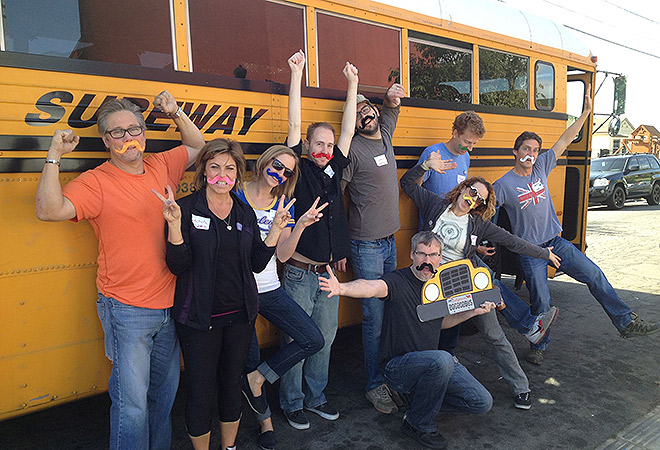 It’s 8 a.m. and you’re in a parking lot waiting to be taken to a secret volunteering location with no clue as to what you’ll be doing or whom you’ll be helping. Sound exciting? The people behind the Los Angeles-based organization Do Good Bus are banking on it.

The Do Good Bus is a volunteering operation born out of a desire to shake up community service. For $35, Angelenos can hop on a bus for anywhere from four to six hours, tackle issues like small disaster relief, homelessness and helping children in need, and make new friends in the process. What’s more, a portion of the fee goes toward whatever cause riders help out with that day. “For us it’s an entire experience, and you’re paying for this whole day thing,” Rebecca Pontius, co-founder of the organization, says. “It’s a great thing for individuals to get involved and get experience without having to get online and do Google searches. We’re curating causes that are really meaningful.”

Founded in August 2010, the Do Good Bus was an idea that sprouted from the unlikely friendships that formed on Pontius’ 30th birthday party bus. “I had all these different groups of friends who had never met before. They were literally shoulder to shoulder, and instant community happened as I guided them and encouraged them to have fun.” Pontius decided to combine the party bus idea with her passion for volunteering. “We didn’t intend for it to be a company,” she says. “It was for friends to try it out, but then a lot of people asked when the next one would be.” Soon after, the organization was approached by indie pop band Foster the People, who had just started garnering attention and wanted a “do-good” charity angle. Together they toured 25 cities across the U.S., volunteering at each stop along the way.

Part of what makes the Do Good Bus enticing is the mystery of the volunteer location, which the organization does not disclose in order to avoid biased opinions about the causes they visit. However, invitations do include a hint about the nature of the activity, from being centered on personal interaction (Good People), helping children (Good Boy), the environment (Good Earth) or animals (Good Dog), or building something (Good Hands). Along with community rides, the Do Good Bus now offers the opportunity to host a ride for friends, coworkers or any group of at least 20 people. “My favorite part is seeing people form relationships within just a couple hours,” Pontius said. “They’re people who really want to get involved but are overwhelmed with where to start. Our goal is that they’ll return, not just on the bus, but to that cause.”

Those interested in taking part in a community ride can join the Do Good team for their next outing (of the Good People variety) on June 28.

L.A.’s Largest Beach-Cleaning Day Ever Is Coming up—and You Can Volunteer to Help