Home Uncategorized A New Testament: How The First Congregational Church of Los Angeles Is... 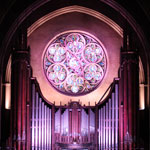 The United States Supreme Court isn’t expected to hand down a ruling on California’s same-sex marriage ban until June, but that isn’t stopping one local church from embracing change. Joanna Sum, the wedding and events manager of First Congregational, recently completed a course on planning gay weddings. Along with church director of communications Curtis Rhodes, Sums tells us what she learned—and why

According to NBC, First Congregational Church is preparing for the legalization of gay marriage. Why?
JS: Everybody here sees gay marriage as something that is going to happen, if not now then in the near future, and we want to be pro-active. Our deacons had a meeting and voted unanimously to move in this direction. Everyone has been very positive.

What has been the church’s policy on same-sex marriage up to now?
JS: We had one lesbian wedding when same-sex marriage was legal for a brief moment. When it was taken away, we decided we would at least continue with commitment ceremonies, and we’ll do that for any of our GLBT community churchgoers or anyone who wants to get married here at the church.

Tell me how you’ve changed your practices this year.
JS: I just went through a certification process to refresh and prep for when gay marriage is legal. I took a Gay Wedding Institute course about what the trends are, what gay couples tend to be doing, and what other faiths are doing for same-sex marriages. It’s a three-week course based in New York that I did online, and every workshop was on a different discipline. Now my materials are open to both homosexual and heterosexual couples—we wont emphasize ‘bride and groom’ as much ‘the couple’—and we’re looking at marketing towards the GLBT community. Another big part was looking at the list of vendors we recommend. It’s one thing for you to say to a gay couple ‘please get married here,’ but its another to then refer them to vendors who might not be comfortable with gay marriage. It was a lot of homework but a lot of good stuff to go through. Now we are creating a network of vendors that we know are open to it.

What is the biggest lesson you took away from the training?
JS: Just what a special moment this is. This is something that many people from Generation X never thought they could do, and just their appreciation and gratitude to be able to get married is a big part of why we are going to love [having gay weddings] here. It’s a renewal of what it means to be married. People want to get married here at a church for spiritual reasons, to share with their close friends and family in the house of God. [Having that option] is going to mean so much more on top of the fact that [same-sex couples] can marry legally.

How has the congregation reacted?
CR: Even ten years ago I think there would have been more resistance to this, and in 2008 when we had that brief window, there were a few deacons who were really not comfortable with it. But just as the country is changing, so too has the attitude of our congregation, and what we have seen is that they really embrace the fact that we are open to people of all kinds. It has been a positive reaction.

JS: We had one heterosexual couple decide not to get married here, and that’s OK.

Have any gay couples booked weddings yet?
JS: No, but I definitely have people telling me they are ready to sign up. We are expecting to have lots of couples know to come this way as soon as gay marriage becomes legal.

What do you think other churches can learn from your experience?
JS: The thing I would hope other churches would see is that everybody is a child of God, that everyone should be free to express and explore who they are. In terms of marriage, I love the fact that the LGBT community wants it. They want to have a family and they want their relationship to be legitimized not only in the state of California but in the eyes of God, and I don’t see how anybody is able to tell anybody else what God is thinking or saying. I hope churches will learn to accept the love as opposed to the hate. During this process I have called some local churches and learned to my surprised that they wouldn’t be willing to do gay and lesbian weddings. But I think they’re not far behind. There’s a lot of politics involved, and it will take some time for the church as a whole to accept this change, but I see good things in the future.