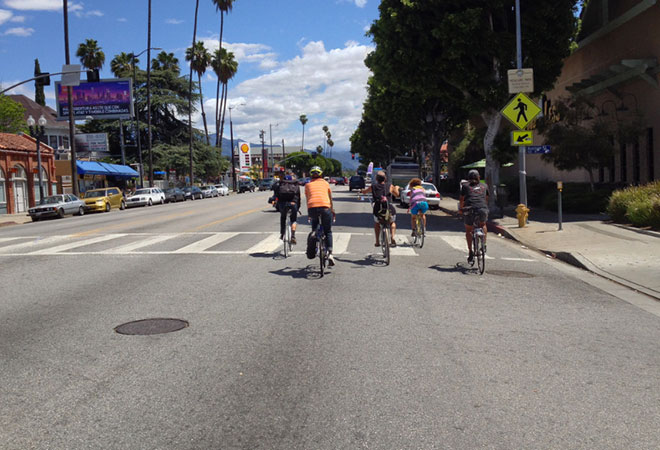 The good news: Metro thinks it’s possible to make L.A. a bike-friendly city. The bad news: I have some doubts about how they plan to do it.

Here is what Metro has proposed, per Curbed Los Angeles: a massive downtown bike share program, to be funded by the 10 and 110 toll fares, with 84 bike share stations and 840 bikes to go around. The goal is to make it easier and more affordable than ever to get around downtown on a bike. I love that.

I also like the idea, which Metro has reportedly also proposed, of having a bike hub at Union Station. What this could do is grow the downtown transportation station into a friendly place for bike travellers complete with bike parking and rentals and knowledgeable staff to help mend broken bikes and sell new ones.

A hub at Union Station could be the start of something bigger. It shows that biking is an important means of transportation, equal to trains and cars. It also gives the initiative a place to live, making Union Station a congregational hall for those into the transportation culture and wanting to learn more about city biking. If the program can spread from Union Station outward, with nearby roads being retrofitted for bikers, this all could possibly work.

But back to the matter of getting more people on bikes downtown. I am concerned that little has been made (sor far) of the increased need for bike safety and bike education, two vital things for people who want to get onto two wheels. Giving someone a bike is great, but they won’t inherit information about biking by osmosis. Most people rode bikes as a kid and don’t realize how important helmets are.

What I’m saying is it isn’t possible to inject bike culture into a city en masse when the inhabitants don’t fully understand what it means to be a biker. Downtown may be a terrific place to start this program because it has infrastructure in place that’s friendly to people who travel on two wheels, but that doesn’t mean that drivers in that neighborhood are ready to share the street more than they already do. In my experience the sight of multiple bikers getting in the way of traffic results in very annoyed drivers and—worse—aggravated driving. Los Angeles simply can’t become a bike city without addressing the needs and expectations of drivers. And the success of CicLAvia events doesn’t count: those are well intended, temporary, idealistic bike takeovers.

This may be a hyperbolic premonition, but Los Angeles is a car city now, and changing that is going to require changing how drivers perceive bikers, not just changing how bikers get around town. I hope a renewed social interest in how drivers and bikers can co-exist on our busy streets follows this latest push for a bike share program. Until it does, we’ve got some uphill pedaling to do.

5 Ways Biking Is Getting Easier in L.A.