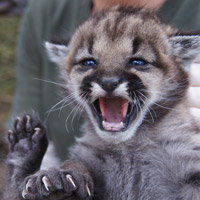 Finally, some happier mountain lion news! Biologists from the National Park Services have discovered two kittens—one male and one female—in the Santa Monica Mountains. The babies, named Puma 23 and Puma 24 (P-23 and P-24 for short) are about six weeks old, and are unfortunately the result of first-order inbreeding. According to DNA testing, their parents are male lion P-12 and female lion P-19, P-12’s daughter.

Now that the kittens have been tagged, biologists from the Santa Monica Mountains National Recreation Area, who are studying 24 lions in the area including P-23 and 24, will monitor their movements.

“They were only in our care for an extremely brief time,” said Kate Kuykendall, public affairs officer for the National Park Service unit. Now they’ll face a number of survival challenges. “Because the lions are hemmed in by the 101 and 405 freeways, many end up facing death because of conflict with another lion over the territory,” Kuykendall explained.  “That or they die as a result of trying to cross the freeway to get to new territory.”

Right now, the kittens appear to be in good health, says Kuykendall. “P-23 is pretty cute!”