Home Transportation A Monorail Through the Sepulveda Pass? Metro Says It’s Still on the... 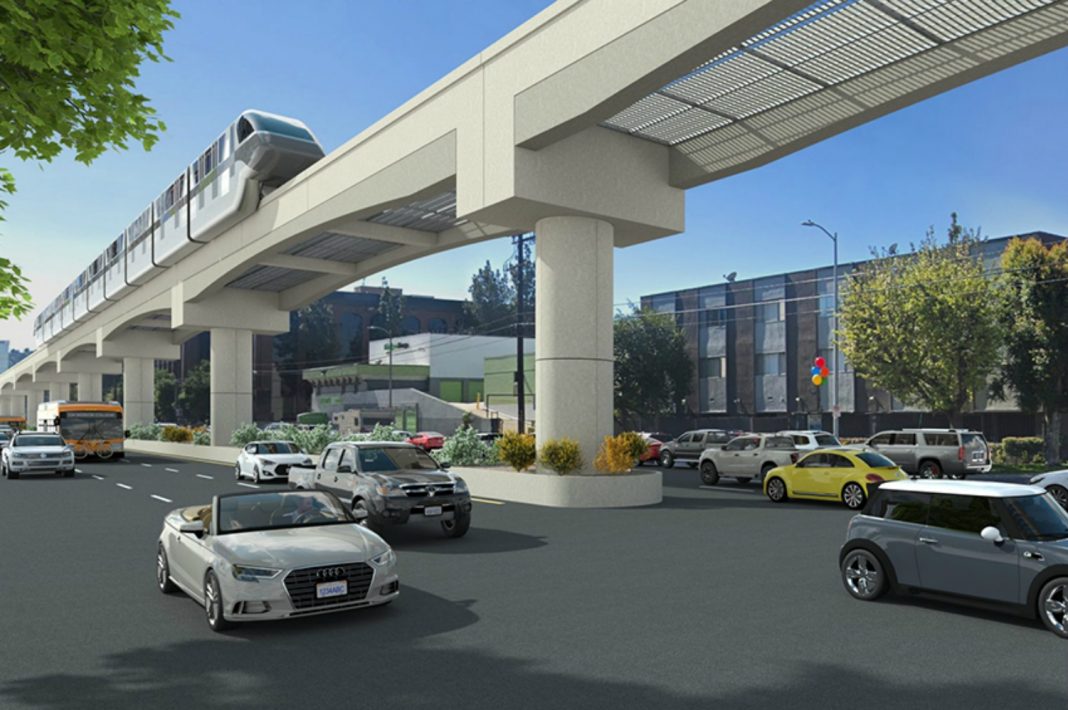 As Metro attempts to complete three rail lines and fix its slumping bus ridership, L.A.’s transportation authority is also working to open a rail line over the Sepulveda Pass before the 2028 Olympics. Now, nine years from Opening Ceremonies, Metro announced Tuesday that it’s down to four options for what could be the agency’s busiest line.

Metro will brief the public on the project’s current status in four area meetings starting tonight near LAX. The current options are three heavy rail subway lines and one a monorail—all will travel from the Van Nuys Metrolink station to LAX, with the first segment connecting Van Nuys to the Expo Line’s Bundy or Sepulveda stations, hopefully in eight or nine years.

It’s odd and fascinating that the monorail has hung in this long since it’s not common transit infrastructure in this country (outside amusement parks, at least) and Metro has never built such a line. While engineers could probably figure out how to design and construct it, such a system would not be able to integrate with other Metro lines. A heavy rail subway down Sepulveda would connect with the future Purple Line in Westwood, ostensibly allowing trains to run along that route towards DTLA.

The findings on the monorail also show it would attract the least number of daily riders (122,000) and take the longest to travel from the Van Nuys Metrolink station to the Expo Line (26 minutes). It might offer some cost savings from the subway options—Metro estimates each iteration will cost somewhere between $9.4-13.8 billion—but it’s not much difference from the other options.

Metro mostly dismisses the idea of a train running in the 405 median, saying there is little room for the columns and such structures would block drivers’ views when the freeway curves. The monorail would likely be partially underground north of Westwood and then run along the westside of the 405, maneuvering around the Skirball and Getty tram. This option doesn’t look long for the world.

The most likely option for the first segment seems the one Metro calls “HRT 1,” which would travel completely underground, with a tunnel dug under Brentwood and Bel-Air. The non-circuitous route would connect with Ventura Boulevard, the Van Nuys Orange Line station and then terminate at the Metrolink station. This option has many happy mediums when it comes to ridership (128,000 daily), travel time (the shortest, at 16 minutes), and cost (between $10.6-$13.5 billion); it would also require the shortest tunnel at 12.8 miles.

HRT 2 only differs from 1 by connecting to the Orange Line at the Sepulveda station instead of the Van Nuys stop; the ridership is lower and take a minute longer. HRT 3 would become an aerial line before the Ventura Blvd. stop and then run along Sepulveda, with stops at the Orange Line and Sherman Way before ending at the Metrolink station. This option actually has the highest ridership at 137,000, but it would require much property acquisition and take 19 minutes to traverse. HRT 3 could be cheaper though because it would swap out some of the costly subway stations for cheaper elevated ones. It may be down to HRT 1 and 3.

Metro notes that it responded to public comments by now studying a Santa Monica Boulevard station that will either go near the job center of Sepulveda and Santa Monica, or near the historic, residential area of Sawtelle and Santa Monica; both would be subway stations.

The extension to LAX—don’t expect that before the Olympics—would take different routes depending on whether the first segment terminates at the Sepulveda or Bundy stops. If it ends at the former, the line could run along the 405, Sepulveda, Centinela (a great option for Silicon Beach), or Overland (a boon for Palms, Mar Vista, and Westchester). Regarding a termination at Bundy, that extension could either travel along Centinela, or terminate at Bundy, and the Purple Line could extend from Westwood to LAX. The possibilities!

Metro also needs to build a maintenance facility for the trains (be it heavy rail subway cars or monorail cars); they’re eyeing two sites in Van Nuys at Woodman and Roscoe, and one in West L.A. at Sepulveda and Nebraska.

RELATED: All of Metro’s Ideas for the Sepulveda Transit Corridor, Graded