Home Uncategorized A Freeway Atlas From Before You Could Say You Took The 5... 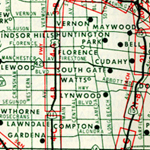 By the time this guide map was published in the beginning of the 1960s, Los Angeles had become a full-fledged freeway city and the automotive age for Southern California was in its middle-years. While this sheet works as an index to a series of strip maps with details about stretches of some of the most cursed-at highways in the nation, it also demonstrates the network of roads that follow the byways created originally by Native Americans, early colonial settlers, and those seeking commerce in the new land.

When the map was published there were 35 freeways and many more extensions or new ones on the way. The first freeway was the rather picturesque Pasadena (1940), and a boom began with the passage of the Collier-Burns Highway act in 1947 that set forth massive projects to connect the dots on the southland landscape. The Glendale freeway only exists here between Glendale and Fletcher drive but the ten-mile trail up to a link to the Foothill freeways is marked as being worked on at the time of publishing. The network filled in as routes were completed one after another in what seems like blinks of the eye: The Hollywood freeway was finished in 1948, the San Bernardino freeway in 1957, the Santa Ana freeway in 1958, the Long Beach freeway in 1965, the Santa Monica freeway in 1966, the San Diego freeway in 1969, and the Pomona freeway in 1971. The San Bernardino was once known as the Ramona, the Santa Monica as the Olympic, the San Diego as the Sepulveda, and the Long Beach as the Los Angeles River freeway. This map comes from the first edition of the Western Map Company guide, which was produced to compete with the Auto Club’s fold out maps and Thomas Brothers street guides by using a slightly different but rather effective way of navigating the terrors of Los Angeles freeways. The strip maps show on and off ramp markings along with other information like speed limits, places of interest, secondary routes, county boundaries, and future freeway construction. The “Freeway Atlas” also marks a time before the freeways were numbered and it became possible to make fun of Angelenos for saying “I took the 5 to the 2, then the 134 to the 170.” Back in 1963 you would have taken the Golden State north to the Glendale north and gotten off`at San Fernando road and gotten lost.

Above: Above: Freeway and Artery Map of Greater Los Angeles, Western Map Co., 1963