Home Uncategorized A First-Timer’s Guide To Conquering The Trolley at The Grove and Staying... 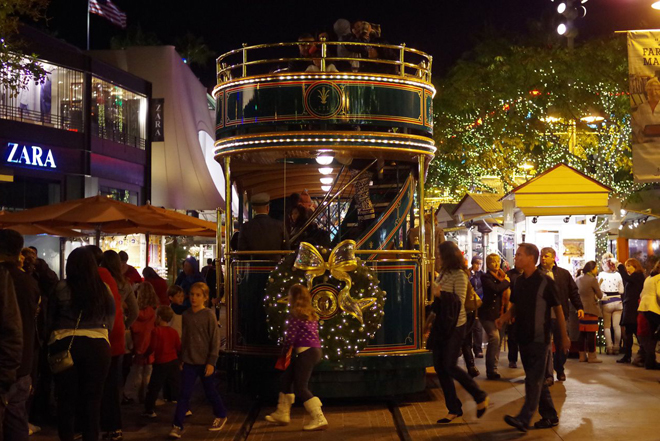 On December 11, I did something that, despite its popularity, I don’t think very many Angelenos have done: I rode the trolley at The Grove.

I did this partly because I was under the influence of the holiday spirit and partly because this local micro-attraction has always instilled fear in me—fear of death.

To confront these feelings and to do something new, I decided to take the trolley head on (but not really head on, because I didn’t want to be that first person who falls victim to trolley tragedy).

I first attempted a ride on a Monday at 3 p.m., suspecting it would be a stress-free time and that the trolley might be empty, or at least not less of a threat to shoppers since less people were likely to be roaming the grounds. To my surprise, the beast was unavailable. Had it attacked someone? Was it too fatigued from giving Santa a ride to the valet? The official word was that the trolley was undergoing “maintenance.” I grinned at a hired holiday jazz band playing in front of Banana Republic as I walked back to my bike.

I made a second attempt on Wednesday night. I figured the chance of fake snow was high, the trolley being out and about again even higher. When I arrived at the east end of the open-air mall the line to wait for a ride was empty. Not wanting to be first in line, alone, like a solo tourist without friends or loved ones on hand, I decided to wait elsewhere, and bided my time staring at a family staring at the Dancing Fountain. When a couple in baggy sweatpants with cameras stepped up to the waiting area, I rushed over to grab a spot behind them. Together we watched the trolley slowly make its way past Fat Cow, Crate & Barrell, and the newly re-opened Nordstrom.

It was still just me and baggy sweatpants x two when the trolley reached us. It was then that I realized for the first time that the bus has two levels: had I been so frightened of the machine that I had never noticed that fact? Apparently so.

The conductors kept those in line waiting for ten minutes while very slow parents disembarked, grabbing strollers and making it known that they wanted their child to ring the train’s bell. Some screaming occurred. I regretted removing my earbuds.

Once the velvet rope was lifted the couple in front of me darted to the upper deck. I smugly chose the bottom but had second thoughts immediately. Did I intend to be that lazy shopper riding the trolley at The Grove—and on a level for all to see?

Thankfully, I had my camera with me, and that put me in good company. In fact, I blended right in save for my tie-dyed pants and a neon hat, marks that maybe (just maybe?) made me look too young and too L.A. to be an interloper. A woman with a giant camera that clicks louder than I could snap sat down next to me, and as I watched her take photos—better photos than mine—from what become apparent was a better seat than the one I had chosen, a second wave of insecurity washed over me. I considered asking her to send me her photos to run alongside this story, but held off.

Five minutes (and no movement) later I realized I had seated myself in the row furthest from the front, which meant I would be traveling backwards. Boy, was I goofing it up.

We weren’t off quite yet. A man with a walker needed to be lifted into the trolley via a wheelchair lift disguised as a stair on the train’s port side. The train leaned in his direction and I feared I might fall out. As this was happening, a young man with two canes hobbled over and jumped onto the train. So that’s another way onboard.

Ready to roll at last, we were encouraged to “sit back and enjoy the ride.” Good advice, but I was too overcome by motion sickness and humiliation to take it: this thing was going way faster than I anticipated and people were watching! “What have I done?” I mumbled over the click of the giant camera at my side. There was no answer.

As we rode along, the conductor offered mild commentary and the overly happy bell continued to chime, announcing the trolley was moving to passersby. It was explained that, like a Prius, the trolley is electric—which makes it nearly silent. The danger factor crept back up in my mind, but it quickly disappeared: this ride was clearly safe. I had had no idea.

After a quick stop in front of the Cheesecake Factory we resumed our journey. It was then, when I had let my guard down, that I heard a scream. “We’ve killed someone.” I thought. False alarm: a child on the trolley needed a diaper change.

Less than five minutes later we had reached the Farmer’s Market: the end of the line. The trolley stops outside of the Taschen store, where you are permitted to stay for return trip or hop off. I opted to leave, and headed to Monsieur Marcel to grab a bottle of wine to celebrate having survived the journey.

As I grabbed a rosé, I realized that somewhere between Nordstrom and Sur La Table I had made peace with the vehicle, that it was in fact a pleasant ride, one that would be perfect to take visitors on and, if you have slow walkers like children or grandparents, a fast way to get move from East Grove to West Grove easily. This sounds ridiculous, I am aware, but I sipped the Kool-Aid. I found the meaning in the machine. And, while doing so, I checked something off my LA retail bucket list: I rode the trolley at The Grove.