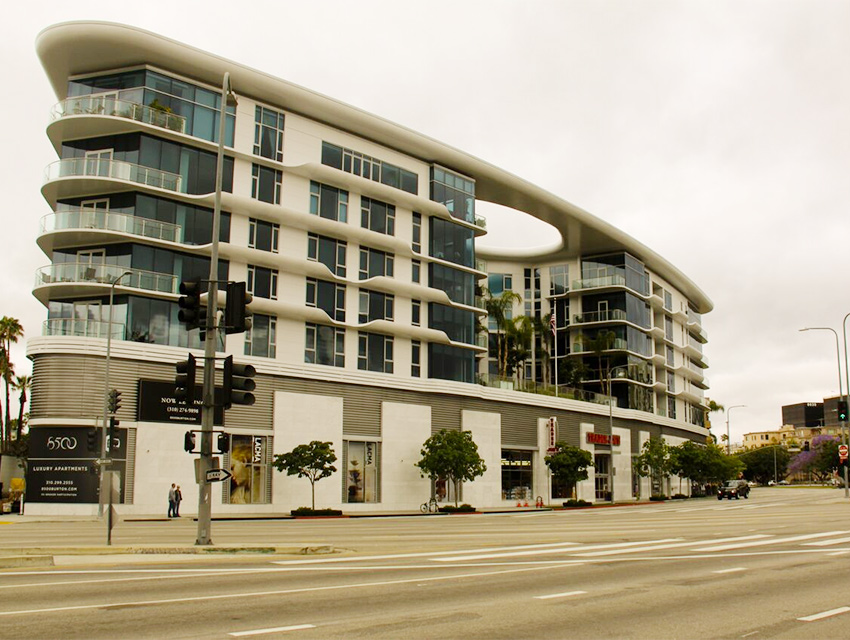 Los Angeles is nothing if not a city of change, its landscape an ever-developing mosaic of buildings, homes, and other structures. Of the many new edifices sprouting up in the skyline, a few seem silver-screen worthy. Though the building, which replaces the former 1950s-era Wilshire Grand Hotel, won’t be completed until 2017, its renderings have been publicized so heavily since they were unveiled in 2013 that its edifice already seems to be a prominent fixture of the landscape. In fact, the building set a Guinness World Record (for the longest continuous cement pour in history) before a single brick of the first floor had even been laid. Its inclusion on this list is a no-brainer.

At 1,100 feet, Wilshire Grand Center will be the tallest building this side of the Mississippi. The 73-story structure will also be the first in L.A. to feature a spire.

I was fortunate enough to speak with architect Chris Martin of AC Martin about the project. Chris comes from a long line of architects. His family has literally shaped the face of downtown L.A., designing such icons as Los Angeles City Hall, the John Ferraro Building (LADWP), the Million Dollar Theatre, St. Vincent de Paul Church, City National Plaza (formerly ARCO Plaza), and Citigroup Center. Each of these structures has appeared countless times onscreen. Wilshire Grand, which Martin calls a “cameraman’s delight,” should be no different.

The silhouette of the structure itself is cinematic. Thematic of the California landscape, the fluid shape of the building’s lines evoke elements of Half Dome and the Merced River in Yosemite. A dramatic 240-by-60 foot “river of glass” skylight canopies over the building’s street level entrance, welcoming visitors to the ground floor lobby. With thousands of square feet of outdoor space, the complex also celebrates California’s temperate climate.

The domed top of Wilshire Grand Center, which Martin calls a “sail,” will boast the site’s most dramatic element: massive digital signage situated on both the north and south exteriors that Martin equates to a real life Bat Signal.

Above the sail, the roof will consist of a level space for a helicopter approach flanked by sloping sides with sheer drops that provide dramatic panoramas of the city below. Martin envisions an epic movie fight scene taking place there.

Wilshire Grand Center’s interior will be just as theatrical. The main lobby will be located on the 70th floor (visitors will be whisked there via double-decker elevators) and will feature floor to ceiling windows showcasing the L.A. skyline plus a massive open sky deck with lounge areas, a restaurant, a bar, an infinity pool, and, of course, 360-degree views of downtown, the Hollywood Sign, Century City, and, on a good day, the Pacific Ocean. The striking Hollenbeck Community Police Station in Boyle Heights was completed in 2009 and is a bit more mature than my other picks, but has yet to see any filming take place on the premises. I believe that will change in the coming years.

Situated behind a large, undulating frosted glass façade, the station’s exterior is almost lyrical, and that’s not an adjective often associated with government buildings. The rear portion of the 54,000-square-foot structure is made up of bright multi-colored paneling and concrete bricks. The unusual and unexpected deconstructive-style design elements are meant to reflect the artistic nature of the Boyle Heights community.

Hollenbeck’s lobby interior is open and airy–again, adjectives typically not associated with a police station. The building is closer in image to an Apple Store than a municipal facility. In short, it is welcoming, which fits with the designer’s vision to “exemplify the LAPD’s efforts to create an open, community-serving police force.” Onscreen it could easily play itself or mask as anything from a cutting-edge office to a sleek design firm.

To me, the Hollenbeck Community Police Station screams modern L.A. and would make the perfect onscreen embodiment of the fresh, fluid, and changing nature of the city. L.A.’s most futuristic building (by way of The Jetsons) is easily the mixed-used apartment complex 8500, completed in late 2012. Commissioned by developer Rick Caruso, of the Grove and the Americana at Brand fame, the structure was designed by Caruso’s own design team, which is headed by architect David W. Williams, in conjunction with MVE + Partners and Hetzel Design.

The eight-story, space age-style building—which encompasses the entirety of the large triangle block bordered by Burton Way, Colgate Avenue and N. Le Doux Road in Beverly Grove—is comprised of 87 one-, two-, and three-bedroom units, a Trader Joe’s, and an upscale restaurant. It totals 252,000 square feet.

With its ship-like exterior, smooth plaster face, curving shapes and horizontal lines, 8500 is, to me, a contemporary example of Streamline Modern-style architecture. The triangular-shaped building’s most compelling element is its massive oval roof cut-out, which sits five stories above a large open-air garden and eight stories above the street. The oculus presents a striking and surprising component on a building that is already, well, striking and surprising.

The original design of the building was much more traditional in style, but was changed one week before plan checks, after the foundation had already been laid. At the eleventh hour, Caruso decided he wanted the complex to be more iconic, and iconic is exactly what he got.

Thanks to its futuristic, retro look, 8500 could just as easily appear in a movie about the future as it could a period piece. LAMOTH is one of L.A.’s hidden gems, and it is an arresting one.

While the Los Angeles Museum of the Holocaust is the oldest Holocaust museum in the U.S., it was originally situated at the Jewish Federation of Greater Los Angeles and subsequently moved several times before finding its permanent home in Pan Pacific Park in 2010.

The 36,000-square-foot museum, designed by Hagy Belzberg of the Belzberg Architects Group, is subterranean, situated beneath a large quilted rooftop garden. Visitors enter the site at ground level and the exhibits lead them below ground. During the descent, the building’s natural light is extinguished, signifying the darkness of the Holocaust. As the exhibits begin showcasing resistance efforts and the end of WWII, patrons move upwards, back toward street level and the light. The design is ingenious, compelling, and hauntingly beautiful.

Constructed of glass, poured concrete, and shotcrete, the stark interior of the Los Angeles Museum of the Holocaust, with its curved gray ceilings and walls, is in stark contrast to the vast green park just outside the entrance doors. The site is absolutely screaming to be photographed, especially its rear exit. Easily the museum’s most interesting architectural element, it’s located at the base of a long ascending hallway and is flanked by towering walls of smooth cement and reflective glass. It looks like something straight out of a Star Wars movie.

The architecture of the Los Angeles Museum of the Holocaust would figure perfectly into the backdrop of a science fiction production. In fact, the museum was recently utilized by director Ridley Scott. Old is new again at the Grand Central Air Terminal in Glendale. The Spanish Colonial Revival-style terminal, with its striking three-story Zigzag Moderne tower, was designed in 1928 by Henry L. Gogerty. Part of Glendale Municipal Airport, L.A.’s first commercial airport, the facility featured the first paved runway west of the Rocky Mountains and was the first to offer transcontinental passenger air service from Los Angeles to New York.

After World War II, Grand Central’s runway was shortened and, in 1959, deemed insufficient for jet plane use. The112-acre site shuttered. Prudential Insurance later purchased and transformed the property into a business park named Grand Central Business Centre. Virtually all of the former airport’s runways and ancillary structures were removed, but the terminal building was left intact and used as office space. In 1961, the Walt Disney Company began leasing the majority of the property, eventually purchasing it outright in 1997 for the headquarters of Walt Disney Imagineering. A renovation of the Grand Central Air Terminal building began in 1991. Much of the interior was gutted, but the plans were halted mid-way. The building has been vacant and left to deteriorate ever since.

Because in 2013 the city of Glendale approved Disney’s planned renovation of the building. The revamped structure will house offices, event space, and a visitor center while the exterior will bear the look and feel of an airport terminal (or an old fashioned train station).

Being that the terminal has already been immortalized onscreen (it appears in Pee-wee’s Big Adventure, Air Hostess, Hollywood Hotel, Sherlock Holmes in Washington, and My Science Project, to name a few films), I have no doubt that it will, upon completion, reclaim its status as star of the screen.

The Grand Central Air Terminal should have the look and feel of Union Station or the Millennium Biltmore Hotel, two of L.A.’s most filmed locations. If restored to its former grandeur, the intricacy of the site’s initial design—with its terra cotta tiles, exposed wood beams, sculpted plaster detailing and ornamented ceiling—will be beautiful on film. I have no doubt directors will be rushing to take advantage of its Old Hollywood charm.