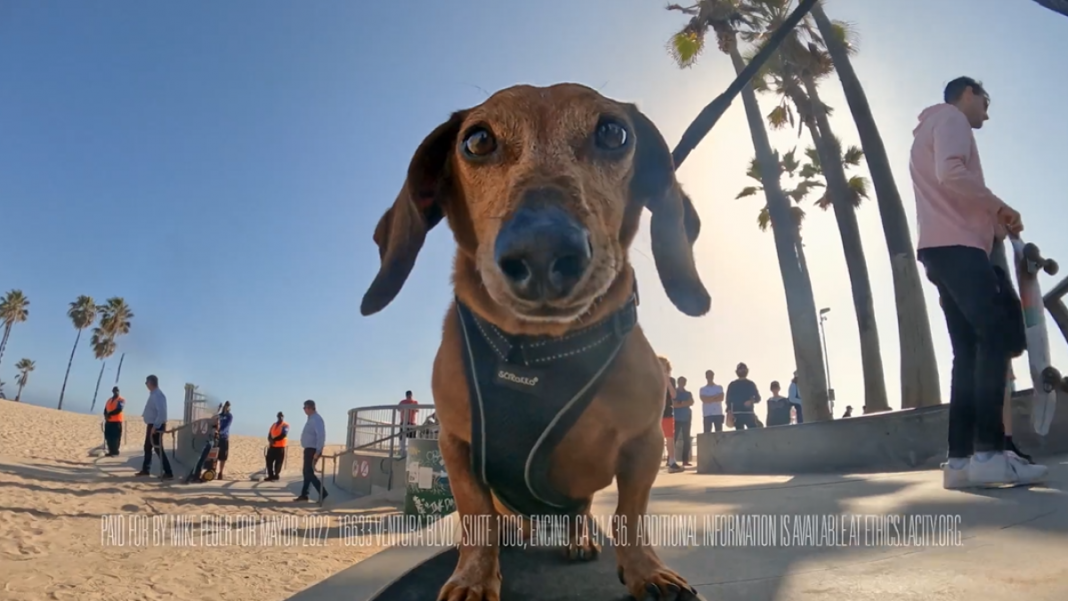 One of the most interesting things I’ve learned during the mayoral election cycle came during an animal welfare forum when City Attorney Mike Feuer revealed that he has never had a pet. This is surprising because, well, who makes a lifetime without a furry companion, and if not a dog or cat, then at least a gerbil, lizard or goldfish? The other reason it’s surprising is that Feuer has held media events in which he trotted out cute four-legged creatures, including a pre-Christmas press conference in 2019 in which he warned how online puppy cons could spoil the holiday.

Even if he has never lived with an animal, Feuer has now shown a willingness to work closely with one, and that has produced a notable moment in the mayor’s race. Last Monday he revealed a new ad, dubbed “Underdog,” in which he stars with a dachshund—and because life is sometimes perfect, the acting dachshund’s real name is Martin. With leash in hand (Feuer’s, not the canine’s), the two stroll on city sidewalks, pass Pink’s hot dog stand, and hop on a skateboard (the dog, not Feuer). A second ad came Friday, and this time Feuer and the dachshund visited Skid Row. Martin is cute, but there is a serious undercurrent: Feuer’s campaign is spending $1 million putting the ads on TV, spreading the message that he’s a contender with a record of advocacy and achievement, even if he is being vastly outspent in the race.

The mayoral ad wars are underway.

Feuer isn’t the only one entering the fray. Last Tuesday Joe Buscaino launched an ad dubbed “Clean Streets.” It’s a much more sober take than Feuer’s, presenting lines of tents as the councilmember states, “Our public spaces aren’t safe in Los Angeles.” He references helping get people off the streets and into housing in his 15th District, and the commercial shows him in a police uniform, a throwback to his pre-political life as an LAPD senior lead officer.

His camp said they are spending six figures on TV buys this week, and that is expected to continue for the duration of the campaign.

These won’t be the only additions to the airwaves. With mail-in ballots arriving at homes this month, and election day landing on June 7, two other candidates, Councilmember Kevin de León and U.S. Rep. Karen Bass, will also presumably soon be airing spots. If you sell ad time on a commission basis for any TV station, cable network or YouTube, then these are the weeks when you start envisioning your future backyard pool.

This marks a new phase in the mayor’s race, and after a couple months, Rick Caruso no longer has the airwaves to himself. The mall master has already spent almost $24 million on his campaign, a huge portion of it on TV ads, and seems to have gotten more airtime than LeBron James and Clayton Kershaw combined. The strategy worked as intended, and in the span of two months he jumped from about 8 percent in polls up to 24 percent, putting him neck and neck with Bass. In the most recent UC Berkeley Institute of Governmental Studies/Los Angeles Times poll, everyone else was in single digits.

Of course, Caruso is not about to relinquish the opportunity to spread his message and show himself in a sweater. On April 19 he directed another $6 million of his own money to his campaign, according to documents filed with the City Ethics Commission. He made a huge ad buy on dozens of TV and radio stations two days later.

One reason this is so important is that many Angelenos are still barely informed about the opportunity to pick a successor to a termed-out Eric Garcetti. Polls have consistently shown that approximately 40 percent of likely voters are undecided. Even if Caruso and Bass sit atop the rankings, there is space for someone else to emerge from the field and mount a challenge. The question is what resonates the most? Is it a light touch with a long dog? Is it warning about worsening crime and homelessness, and presenting oneself as the heroic solution? Or something else?

None of this activity is new. Candidates regularly hold onto as much cash as possible until late in the game, with the aim to buy TV ads and convince low-information voters that they possess the secret sauce to turn L.A. around. That is the case today, but the situation is elevated by the matching funds program. This is free money the city dispenses, in the effort to level the proverbial playing field, to candidates who demonstrate the ability to raise a certain amount of cash from local donors.

City leaders a few years ago super-sized the program. Whereas mayoral candidates in 2013 could max out at $667,000 in the primary, now they can blast into the seven figures. Indeed, this week Bass got $1.06 million in matching funds. Meanwhile, Feuer is up to $742,000, and de León has gotten $417,000. Expect Bass and de León’s tallies to climb, and Buscaino and other candidates will likely get the cash, too.

There are numerous ways this and money secured through traditional fundraising will be spent in the coming weeks. Radio matters, and some candidates have been airing commercials on Spanish- and Korean-language stations. Money goes to phone bankers and for colorful placards, not to mention all the slick mailers that get glanced at for three seconds before a one-way trip to the recycling bin. By the morning of June 8, with the votes counted, no dollar will be left unspent.

But with the election approaching, much of the money will be transformed into video, and these commercials will be inescapable, whether on broadcast TV, cable or the web. You will become familiar with the candidates, and perhaps even tired of them. Consider yourself warned.

Mayoral Money: How the Candidates Fundraising Figures Stack Up

How Rick Caruso Spent $23.78 Million on His Mayoral Campaign