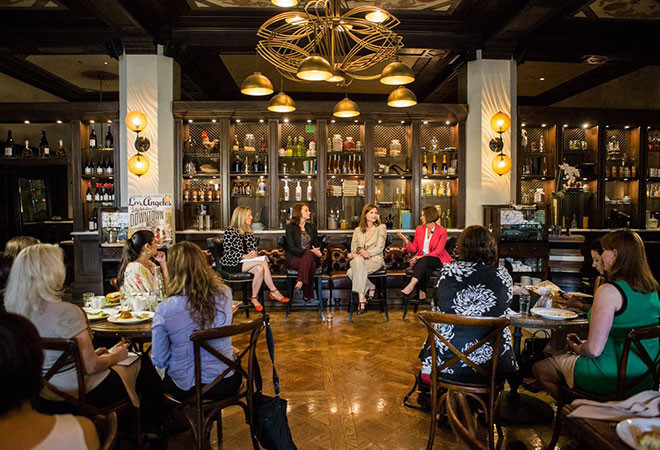 When First Lady of Los Angeles Amy Elaine Wakeland, actor and activist Geena Davis, and Mount St. Mary’s College president Dr. Ann McElaney-Johnson sat down to discuss the state of women’s leadership with Los Angeles magazine editor-in-chief Mary Melton at Public Kitchen & Bar Thursday morning, there was enough wisdom—and coffee—to go around. The discussion, which was the latest in a series of breakfast conversations hosted by the magazine, was attended by KCRW general manager Jennifer Ferro; Eric Garcetti’s chief of staff, Ana Guerrero; and city councilman Tom LaBonge, among others. Here are eight takeaways from the Q&A:

Men Are Still Ahead, Dead and Alive.
Despite significant progress and the success of leaders like California Attorney General Kamala Harris and senators Dianne Feinstein and Barbara Boxer, California women still earn less in every occupational category compared with their male counterparts according to Mount St. Mary’s 2014 Report on the Status of Women & Girls in California. They’re less visible in film, television, and the news, too. As an example, Davis, who founded the Geena Davis Institute on Gender in Media, shared an anecdote about a prominent newspaper recently defending its habit of running more obituaries for men than women. The point: “It’s in our unconscious that news is about men.”

Your Invitation to Get Involved Isn’t in the Mail.
According to McElaney-Johnson, women tend not to seek leadership positions until asked to do so—and that keeps them from nabbing more prominent roles. The evidence is hard to miss: “If you go look at the people who have signed up to run for elected office in the next round, you will find some races that don’t include any female candidates at all,” said Wakeland. “If you want to change that, now is the time to change it, either by choosing to run yourself or choosing to encourage someone you know.”

Looks Matter.
Wakeland shared that when her husband, Eric Garcetti, was elected mayor, he set a goal of appointing more women to city commissions than men, and that his office searched not just for women willing to serve but women who represent the diversity of our city. “If you get all those women in a room, they look like the face of Los Angeles, which is important,” she said.

Leadership Isn’t For Every Woman—Yet.
When asked about the importance of mentoring young women, Wakeland was blunt: “I’m not sure I want to mentor certain young women to get into certain positions in the elected world,” she said. Her reason: It’s “such a nasty world.”

“The bigger question for me,” she added, “is how do you change the culture of government?”

Behind Every Powerful Woman There Is a Modern Man.
Davis, McElaney-Johnson, and Wakeland agree: support at home is key to women achieving more at the office. That means men who are comfortable playing a less traditional role in heterosexual relationships are just as important to moving the needle on gender equality as women.

Thelma and Louise Were On To Something.
Davis, who starred in the 1991 film Thelma & Louise, said the cult classic is ultimately about women regaining control of their lives—though she’s not sure it would get made today. “That’s still an important message.”

So is Amy Poehler.
When asked what she thinks of the ways in which political wives are portrayed in film and TV, Wakeland said, “I can’t watch political shows because they completely stress me out.” She did, however, call Leslie Knope, Amy Poehler’s character on Parks and Recreation, “one of the most interesting characters” on television. Why? “I can see some of those people in government… There are a lot of everyday Pollyanna-ish, kind-of funny do-gooders like her character.”

The Future For Women Is in Good Hands
Despite the grim statistics revealed in Mt. Saint Mary’s report, McElaney-Johnson says many of the young women she encounters perceive the opportunity gap to be smaller than it really is—a perception we need to disabuse them of. Still, there’s at least one reason to be hopeful:  They aren’t hesitant. “We were really waiting for people to say ‘you should do this,” she said. “I find that this generation is delightful to watch… they are ready to go.”