Home Business RadPad and Westside Rentals Are Vying to Help You Find Your Next... 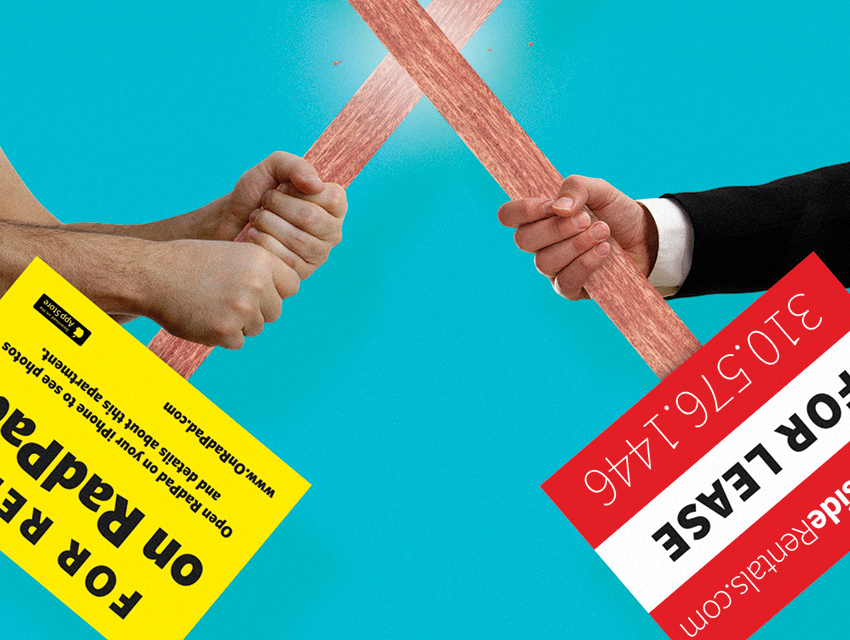 The first month after she moved to Los Angeles, Sydney Kirsop, an actress in her twenties, lived in a shared bedroom in an Airbnb house in Northridge. The price: $200 a week. Kirsop didn’t have a car, and she soon discovered that auditions were hell to get to from deep in the San Fernando Valley. Back on Airbnb, she booked another shared bedroom in Hollywood. Three weeks at $300 a week.

When I met Kirsop, a pretty blond who said she was escaping community theater in her native Milwaukee, she still had no apartment of her own. As she got ready to start rehearsals for a play at the Next Stage Theater at La Brea and Sunset, she’d booked her third Airbnb room share, but for now she was spending the night—and $50—in a space called PodShare near Hollywood and Vine.

PodShare, which was started several years ago by a Russian-born New York transplant named Elvina Beck, is a funky storefront loft and former pot dispensary done over with track lighting made of exposed copper pipes. There are computer stations (rentable for $5 an hour), lockers for your stuff, and a bunk bed, or “pod,” ginned up with a flat-screen TV loaded with a Roku streaming device. Think the squatter bonhomie of the musical Rent reimagined for the smartphone-swiping share economy to lure, among others, what Beck calls “the transitioners,” people who have moved to L.A. but haven’t found a place to live.

In our city the antithesis of PodShare has long been a red-and-white-striped blur that unfailingly invades your peripheral vision at 35 miles per hour, a lawn sign bordered at the bottom by two sets of black numbers. The numbers on the left are a code assigned to the rental unit; text that code to the numbers on the right and, the legend goes, your apartment troubles will soon be over. Or you will have only reached Westside Rentals.

Certain local brands hang around and, even if not especially loved, nestle their way into the civic consciousness. Such is the case with Westside Rentals. I was surprised to discover it has been in existence for only 20 years; if it seems like it’s been putting people in apartments since the days of Mayor Sam Yorty, that’s because so much about apartment hunting changed after the company began charging members for a printed-out list of available units that, at least at first, were strictly on the Westside.

In 1996, when Westside Rentals got its start, “the classifieds” was a phrase still in use, and the “fair market rent” for a two-bedroom apartment in L.A. had risen to around $880, according to a Southern California Association of Governments estimate. Rents are now triple that in many desirable L.A. neighborhoods. As of third quarter 2015, according to data from the real estate brokerage firm Marcus & Millichap, the average rent for a two-bedroom in the Burbank/Glendale/Pasadena area had risen to $2,338 a month, while Palms/Mar Vista was at $2,751. The lowest-priced area in L.A. County was the Antelope Valley, at $969 (and that’s at the northernmost tip, 30 miles from downtown Los Angeles); the highest was Santa Monica/Marina del Rey, at $3,717.

Today Westside Rentals—with its baseline membership charge of $60 for 60 days—retains the aura of being the first name in L.A. apartment hunting. This feels a little like saying the 10 freeway retains the aura of being a straight shot between downtown and the beach. Alternate routes to apartment living beckon, free of charge: Trulia, Zillow, Zumper, Lovely, the “pads”—PadMapper, RadPad, HotPads—and, as a first and last resort, the people’s republic of Craigslist.

It’s sort of in vogue to scoff at paying for a Westside Rentals membership (a few renters I talked to admitted they’d borrowed a friend’s or bought a used membership on Craigslist). Of more discerning comportment were the transitioners I met. They weren’t so much in between apartments as not entirely buying into the tyranny of first-plus-last-plus-security deposit. Far from derelict or bohemian, they struck me as dialed in—even wise—and lacking in the panic I felt in my twenties, when I rushed into leases and bought wicker because I thought it represented “home.”

It was at a six-month “pop-up PodShare” (24 pods for 28 people, and a downtown warehouse space without walls but with Roku access) that I met Michael Richards, a 26-year-old from Fairfield, Connecticut, and 25-year-old Brian Smith from East Lansing, Michigan. Both had been in L.A. for months and already had jobs—Richards delivering for Amazon and Smith as a software developer for the ticket-buying site ScoreBig. Now they were looking for an apartment together. Smith said he was monitoring Craigslist and Trulia. When I asked why not Westside Rentals, Richards said, “What’s Westside Rentals?”

12 Essential Items for Every Room in Your Rental

The 4 Styles of L.A. Homes Worth Coveting