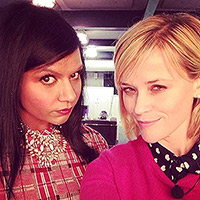 This past Saturday, Brentwood School played host to their 2nd Young Women’s Conference titled “It’s Our Turn,” which seeks to empower young women, inspire them to take charge of their futures, and motivate them to influence their peers in a positive way.

Over 900 girls from schools around Southern California were in attendance, as were a slew of formidable female powerhouses (Maria Shriver, Lisa Leslie, Reese Witherspoon, Rebecca Isaacs, Mindy Kaling, Geena Davis), all of whom hosted panels throughout the day. Here are three pearls of feminine wisdom we walked away with. Comparison is a Lose-Lose Game
Being the inspiring woman that she is, we expected no less of the advice doled out by Maria Shriver. She shared her desire for each of Saturday’s attendees with us. “I hope that a conference like this would teach young women that it’s ok to be who they are,” she said. “The greatest accomplishment is to create your own identity and to invest in yourself. If you don’t invest in yourself—in your own education, in understanding who you are and what you need—you wont be a good partner, you won’t be a good parent, and I don’t think you’ll be successful, whatever that means in a greater context. I also hope that women would stop comparing themselves outwardly and inwardly to the person sitting next to them because it’s a no-win comparison.”

Mentors and a Strong Identity Are of Utmost Importance
When we asked her what knowledge she hoped to impart on the girls gathered at Brentwood School, Reese Witherspoon emphasized the importance of mentorship. “It’s so important for women who have accomplished a certain amount to reach out to younger women who are coming up in the same profession,” she said. “It’s also important that younger women seek [older women] out—you get going in your career and your life and you don’t realize that people are watching you and charting your progress, and it’s good to look back on it and see how you got there.” She also stressed the need to have a strong sense of self, particularly in a culture so wrapped up in body image. “It’s so important to find your inner happiness, she said. “It’s easier said than done; we all struggle as women with body image and self-esteem, but I feel encouraged when I look at television and movies and I see all kinds of different women represented. The whole culture is changing.” Employ Selective Hearing When it Comes to Feedback
Leave it to comedian extraordinaire Mindy Kaling to dish out practical guidance. In an intimate presentation with Witherspoon wherein the two interviewed each other, Kaling shared some common sense with the young girls, saying, “I was and still am addicted to feedback. I think that can be good sometimes, but something I had to learn was to only get that feedback from smart sources. People will say incredibly painful things and you can’t understand how they can muster up the energy to feel such hatred towards you.” She went on to share stories of young girls telling her that she is their role model or that they’d like to be her friend, which “makes it all worth it,” she said.

Witherspoon shared in the sentiment that Kaling is indeed a great friend, at which point Kaling let her perfect comedic timing fly free. “I’m an OK friend,” she said. “I’m a little bit of a freeloader, to be honest. You have the most beautiful Christmas party every year and this year I took sweets with me on the way out. There was a stack of little brownie bites and I took them.”