Home Uncategorized Will this 1,000-Foot Slip-And-Slide Make it to L.A.? 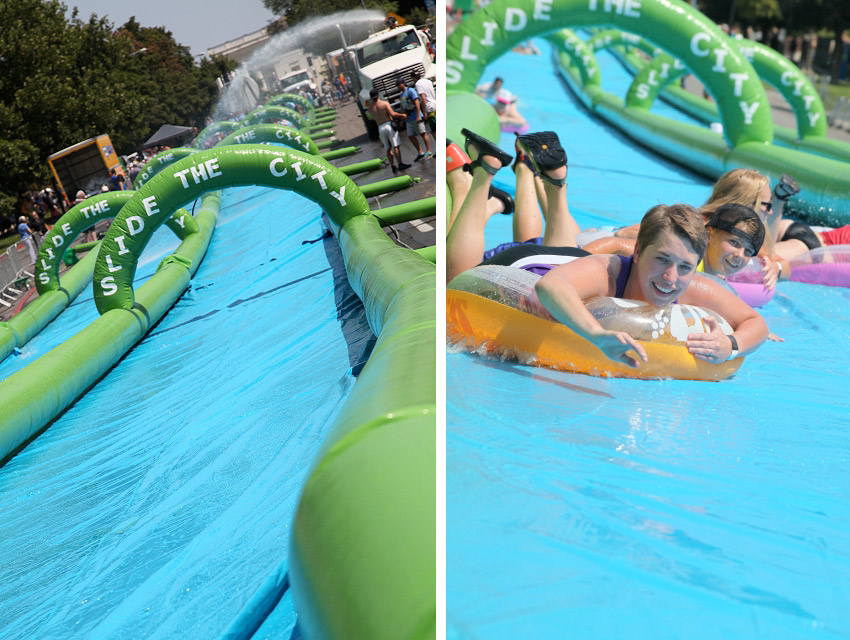 UPDATE, 9/22: Late last week, Slide The City posted sad news on their site that all but confirms the cancellation of their inaugural Los Angeles event. According to the organization, the city has denied their request for permits that would allow a three-block-long slip-and-slide to take over downtown L.A. “We have been working even harder over the past few days to resolve any issues the City may have but it appears there is no resolution,” they said.

News of Slide the City’s plans, which would require the use of 15,000 to 20,000 gallons of water, spawned a a Care2 petition from drought-concerned Californians. Though the organization responded by arranging for the water to be recycled and reused in Griffith Park, it’s looking like the sold out event is a no-g0. StC is offering refunds to those who’ve already purchased tickets, but they’re asking participants stick with them as they “are at the city offices right now trying everything we can.” Email [email protected] for reimbursement info.

Prepare for an inappropriate outburst from your inner child: on September 27, Olive street from Third to Sixth streets in DTLA is set to be shut down to make way for a fully functional 1,000-foot slip-and-slide.

According to LA Downtown News, Slide The City, a “family friendly slip-and-slide water party event,” is organized by McFarlane Promotions in San Diego. The organization has plans to travel to 32 different states over the next few months, bringing soapy goodness wherever they go.

One ride costs the amount of a pricey lunch entree—$15—but $25 will buy three slides, and $35 covers the cost of unlimited journeys down a luge longer than three football fields. (Dear Mom and Dad: Don’t put a price on the kids’ fun.)

One wrench in Slide The City’s plans? Drought-aware Californians who feel like now is not the time to be indulging in water-based extra-curriculars. A woman named Karina Soto has started a Care2 petition in an effort to stop the event. “It is extremely irresponsible for any city in California to allow an event like one featuring a giant water slide to take place for the sake of money and fun while the state as a whole has been suffering from this drought,” Soto writes in the petition.

In a response to Soto, Slide The City penned a tongue-in-cheek Tweet on August 9:

@kr_webb @DowntownNews our crew won’t be showering or watering our lawns that day to conserve. Oh and may just use the water from a pool.

Yesterday, they shared another one that seems to be a more serious attempt to address her concerns.

We recycle water used on the slide throughout the day, we treat it with pool chemicals, and dispose of it properly #waterconservation — Slide the City (@slidethecity) August 11, 2014

Soto’s petition has received 3,984 signatures as of this afternoon. Her goal is to reach 5,000 by September 27, but it is unclear if the effort will incite city officials to stop the event.