Home Crime 20 Years After: The Activist 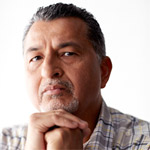 I was working for a nonprofit organization named CARECEN in a house off Wilshire in Pico Union, the political and cultural center of Salvadoran life. I was just one of thousands of Salvadorans who had fled the civil war. Eventually I lost three brothers to it. By April of 1992 we were the second-largest Latino community in L.A. The news came on and we went out—people were already looting on 7th Street. We went to a Circuit City and saw people walking out with TVs. Downtown was chaos. A lot of folks took advantage that weekend, but for some of us the rioting was a way to express anger over the social injustice we’d been fighting. One lesson of the riots for Salvadorans was learning of the different cultures among us. In Latin America we call everyone who has thin eyes, “Chinese.” Koreans, Japanese – they were all Chinese to us before the riots. So we were introduced to the Korean community. I met with African American leaders. I was asked to join Rebuild L.A. and went to places like Watts, where I saw levels of poverty far beyond anything imaginable. “How could the riots occur in L.A.?” had been a question in my mind beforehand. After visiting Watts, I understood why the riots happened in Los Angeles.