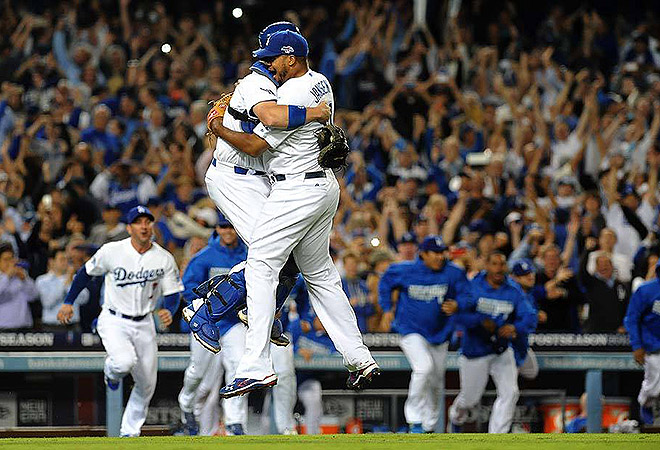 2013 has been pretty kind to us Angelenos, though it’s easy to forget the watershed moments. Before ushering this year out and ringing in the next, we’ve decided to take a look back at thirteen people, places, events, and awards that have made L.A. even cooler than it already was. Here are a few things we gained in the last twelve months:

A “Gloriously Original” Eatery
Back in April a tiny 26-seat restaurant called Trois Mec opened up in a former Raffallo’s pizza space. The brainchild of Jon Shook, Vinny Dotolo, and Chef Ludo Lefebvre has since skyrocketed to culinary fame (and to No. 1 on our 2013 list of Top Ten Best New Restaurants, on newsstands now).

A Western Division Title
Our Boys in Blue rose from the ashes this year to clinch the NL West crown on September 19th. Lest we forget, the Dodgers were nine-and-a-half games down and in last place in the NL West on June 21st, but they went 46-10 through August 23 while the rest of the division was left in their dust. Thanks to the return of a slew of injured players and the force that is Yasiel Puig, the Dodgers overcame the largest deficit they had ever faced to win the division title.

A Man With A Plan
Eric Garcetti assumed the role of mayor in July, beating out Wendy Gruel and claiming victory just after 3 a.m. on Wednesday, May 22. At only 42 years old, he is the youngest elected mayor in more than a century (not to mention the first elected Jewish mayor of L.A.—ever).

A Fanciful Way To Traverse SMB
WeHo debuted its Pop Art-y PickUp trolley back in August, and the city hasn’t been the same since. With its 8 p.m. to 3 a.m. service, its custom playlists curated by DJ Derek Monterio, and onboard photobooths, we wonder how locals got by (and around) before.

Recognition For Walkability
Speaking of WeHo, how about that award the city won in November? You know, the one where it was crowned The Most Walkable City In California?

A Tangible Timeline of Our History
Los Angeles turned 232 in September, and the Natural History Museum celebrated the occasion with their exhibition Becoming Los Angeles. With objects (think a Tongva canoe fragment, a silk flower from the Chaplin film City Lights, Mary Pickford’s curls) covering the span of a century, the downtown institution captured L.A.’s story in an extraordinary way. We marked the anniversary with our own DispL.A. Case too. The very last object was added today!

A New Way To Wear City Pride
NARS Cosmetics copped to its crush on Los Angeles with their limited-edition “NARS Loves Los Angeles” shades. Between bright, shimmery shadows, sheer peach blushes, and bubbly pink glosses, the company got the L.A. look down pat.

The Return of Noir
Listen here, see? 2013 was bookended by trips back in time to Noir L.A. courtesy of Ruben Fleischer’s film Gangster Squad (January), and Frank Darabont’s TNT series, Mob City (December). Both ventures feature a crop of talented actors (Ryan Gosling, Emma Stone; Jon Bernthal, Edward Burns), but the real star in both is the City of Angels.

Pay-What-You-Will Entertainment
This year, the Pasadena Master Chorale decided to try something new: “selling” tickets to their season opener for zero dollars. Donations were accepted after the performance, with concertgoers encouraged to give only what they felt the show was worth. Music first, money later? Hear, hear.

A Spicy Soiree
There may be a shortage of Sriracha now, but back in October, when we lived in a land flowing with rooster sauce, a brand new festival was created to celebrate the hot stuff. The inaugural event, which took place downtown at Lot 613, was a huge success. Just one day later, Sriracha maker Huy Fong Foods was sued by the city of Irwindale for causing “burning eyes, irritated throats, and headaches.”

A Film Czar
In September, Eric Garcetti hired ex-AMPAS chief Tom Sherak as L.A.’s official Film Czar in the hopes of making Los Angeles even more film friendly and persuading local lawmakers to do more to support the entertainment industry. Sherak will only make one dollar a year (yes, really), but hey, it’s a labor of love.

A Splashy Way To Recreate
The revitalization of the L.A. River continued with May’s opening of the Pilot Recreational Zone, a full two-and-a-half miles of waterway where it’s A-Ok to fish, bike, walk, and kayak without a permit. Before this year, Angelenos hadn’t been able to slosh the day away since the ‘30s.