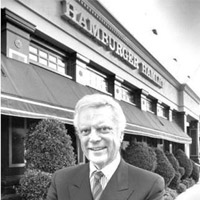 Hamburger Hamlet in Pasadena will close its doors at 10 p.m. tonight. Tomorrow, the location will be taken over by Du-Par’s, and there will only be one Hamburger Hamlet left from the original Sherman-Oaks chain.

I’m still in deep mourning over the loss of the Sunset Strip location on December 17, 2011. I was there for its last day and plan on saying farewell to the Pasadena location in person on Thursday, too. I feel it’s my duty as an Angeleno because the Hamlet has been such a big part of Los Angeles culture, and since it helped shape my childhood.

Nothing pained me more then saying goodbye to the West Hollywood neighborhood hangout. It was where you bumped into celebrities and industry moguls in a casual environment, dining in darkly lit giant red leather chairs. But there was nothing casual about the clientele. Where else could you see Dean Martin sipping a martini at the bar, Lucille Ball hair spraying her red locks in the ladies room, Bette Davis chain smoking in the Tap Room, or Frank Sinatra taking a meeting with his publicist? I witnessed all of this first hand.  Even the restaurant’s hostess, actress and singer Frances Davis, who was once married to Miles Davis, would occasionally burst into song and dance while taking you to your table. I remember Francis and Diahann Carroll discussing chord progressions in the lobby. It was great eavesdropping.  For me, it was also a home away from home. At times the Hamlet felt like an extended room of our house. Raised a few blocks away, I had my 10th birthday party in the main dining room, and my high school graduation dinner in the Tap Room.  After the sudden passing of my father in 2009, Hamburger Hamlet was the first place my mother and I ran for comfort.

Speaking of comfort let’s get to the food. I have never had a bad meal or lousy service at the chain. The legendary menu pleads, “Eat the sides I pray you.”  The fried zucchini plate is referred to as “zircles,” the hash browns filled with Lavish sour cream are “Those Potatos,” and the signature “Marilyn Burger” is named after owner Marilyn Lewis. But the most popular dish is their lobster bisque, and it is known around the world.

Some may remember the Hamlet’s very first location near the Whisky A GO GO. It was opened by Harry and Marilyn Lewis. Their son Adam tells me, “all people who knew Dad remember him as friendly, loving, kind. And he was all that.”

A contract player for Warner Bros in the 40s, Harry is better remembered for Key Largo, which he stared in with Humphrey Bogart, Edward G Robinson, Lauren Bacall, and Claire Trevor (who won Best Supporting Actress for her role in the film) than he is for his chain of restaurants. The film came out in 1948 and by ’49, the House Un-American Affairs Committee was going after the movie business. Fewer films were released during that time and the studio system with contract players went away. In other words, Lewis could no longer earn a regular weekly paycheck doing what he loved so he made another plan.

According to Adam, the idea of operating a restaurant for actors made a lot of sense to Harry. “When he met my mother, she drove that idea to reality,” he says. Hamburger Hamlet arrived in 1950. The family sold the chain in 1987 for $33 million, then went on to open Kate Mantilini in Beverly Hills. Today, that restaurant is operated by Adam and his brother. James Lauver, a waiter who worked at the Hamburger Hamlet on Sunset from 1977 until it closed, then went to work at Kate Mantalini in 2011. “The Hamlet was like a country club without the monthly membership,” he remembers. “I waited on everyone from Danny Thomas to Florence Henderson to Mel Brooks.”

Like Lauver, many Hamlet staffers have been able to keep their jobs despite location closings. I’m told the Pasadena crew will be staying on after Du-Par’s takes ownership of the property at the end of the week. Unfortunately, the retro décor will not survive. As far as what’s to come for the Sherman Oaks location, I will keep you posted.  The unfortunate fate of the Pasadena outpost gives me one more reason to patronize it and Kate Mantilini.