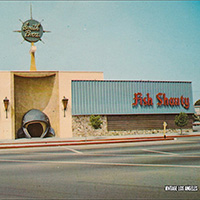 Established in 1950 by the Smith Bros., the Fish Shanty was classic West Coast kitsch. Located at the intersection of La Cienega Boulevard and Burton Way, it was known to Angelenos as “the restaurant that swallowed you whole,” and nothing thrilled me more as a child than walking through the jaws of the Shanty’s whale façade or hiding under his fin, which was made out of thousands of tiny, ocean-blue, midcentury mosaic tiles that sparkled during sundown like the crest of an effervescent wave. (It will be forever preserved on film after being used as the entrance to a British club in the 1965 black comedy, The Loved One.)

The kitchen served reasonably priced seafood in a nautical atmosphere that included a ship’s wheel, lavender leather booths, and an aquarium with turtles in the entryway. It was the first time I ever tried clam chowder and sand dabs, and I specifically remember ordering Shirley Temples with extra cherries. (I still have a couple of the plastic mermaids that the waiters stuck on the rim of my glass.)

Believe it or not, this area of Los Angeles was once a playful pocket of themed restaurants, amusement parks, and nightclubs surrounded by an amazing landscape of kooky architecture. The fish shack was conveniently located across the street from a disco in the shape of a giant claw called Osko’s and down the road from several beloved cartoonish destinations, like Beverly Park and Ponyland. (Yes, you could actually ride a Ferris wheel or jump on a pony where the Beverly Center is today.) Other nearby eateries included Tail o’ the Pup, the Islander, Alan Hale’s Lobster Barrel, and Velvet Turtle. How appropriate! And who could forget playing in that gigantic boot inside Standard Shoes just a few blocks away?

Fish Shanty fit in perfectly with these whimsical landmarks and blended right into so-called Restaurant Row on La Cienega, a section of trendy restaurants such as the original Lawry’s, Ollie Hammond’s, and Tail o’ the Cock. Most of these places are now just memories that helped shape my youth, and the Shanty was the captain that anchored them.

Tragically, Fish Shanty was demolished after a fire in the early ’90s and was replaced by a car dealership. Today it’s a swanky apartment building courtesy of Rick Caruso, complete with a Trader Joe’s. The thing I love the most about this re-use of the original Shanty site is the oval cutout in the top of the new structure. For me, it represents the neighborhood whale that always made me smile. So next time you walk through the doorway of that Trader Joe’s, imagine yourself  heading into the belly of the beast.