Home Uncategorized The Great Paper Debate: What Will Become Of The Los Angeles Times? 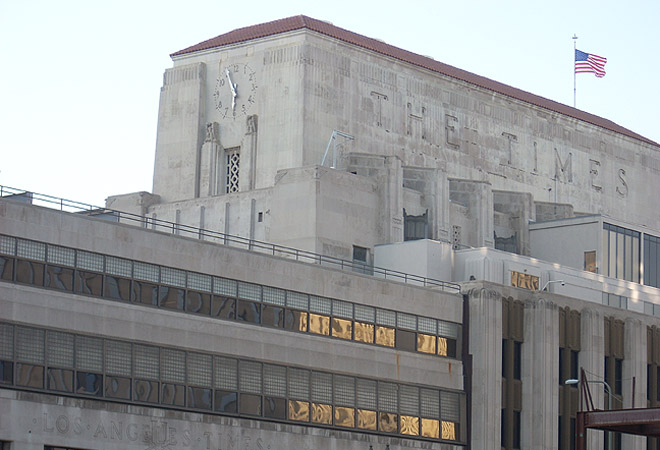 Amidst rumors of the floundering Los Angeles Times being bought by a private owner, Chicago-based Tribune Co. announced yesterday that it is planning to create a separate company for its publishing arm titled Tribune Publishing Co.

The offshoot would include the Los Angeles Times, the Chicago Tribune, and six other daily papers, while Tribune Co. would retain all of its other properties, including 23 television stations, WGN radio and cable networks, television production, digital and media services ventures, real estate holdings, and its stakes in various websites.

Before Tribune Co.’s proclamation regarding the spinoff, speculation was swirling around who exactly would bail out the Times and its six cohorts. Eli Broad and Rupert Murdoch were both in the mix, but it was the billionaire Koch brothers—whose funding of conservative causes made them the unpopular choice amongst both Angelenos and Los Angeles Times staff—who seemed most vociferous in their plans to purchase the papers.

Recently, though (and perhaps even in light of Tribune Co.’s plans), The Koch’s investment in any newspaper is “not of the front burner,” or so Charles Koch told the Wichita Eagle. “We are at square one on that,” he said. “There are tremendous changes going on in media, in taking media as a whole, all forms of communication. We’re back at square one analyzing where is the most change, where are the best opportunities for new entrants to come in and add value? And so newspapers are one, but there are all sorts of others. There’s the Internet, there’s TV. There’s entertainment. And so we don’t know where we’ll end up on that.”

A variety of power players are likely thrilled to hear it. Last month, former FCC Chairman Reed Hunt gave a speech at UCLA in which he shared his thoughts on the Koch’s potential acquisition of the Times. “I’d rather have Murdoch than the Kochs own the Times, if it came down to that choice,” he said. “The Koch brothers use money and media to misinform, misdirect and make miserable all of us.” Just yesterday, Mayor Eric Garcetti shared a similar opinion in an interview with HuffPost Live. “I’d rather see local ownership,” he said simply.

Our new mayor may get his wish if the Tribune Co. spinoff is a success. Earlier this month, San Francisco media consultant Alan Mutter shared his thoughts on an unlikely buyout situation in an interview with KPCC. “My guess is if Tribune could have sold the papers at an acceptable price, they would have done so,” he said.