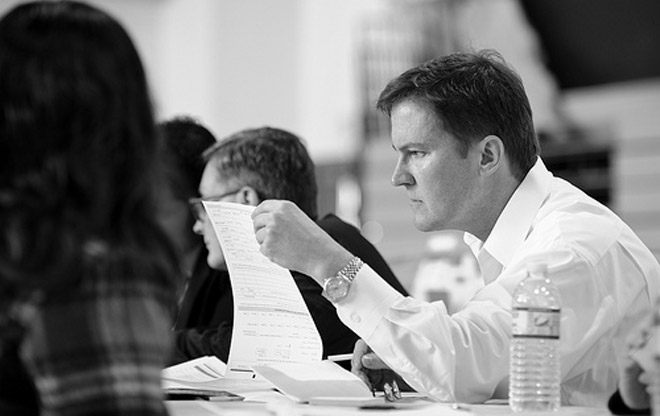 Kevin James has been the surprise of the mayor’s race. While still a long shot, the lone Republican candidate has been holding his own against a trio of better-known and better funded political names.

The secret to James’ success has been to play up his outsider status (he’s never run for office before) while placing the blame for the city’s fiscal woes on the three incumbents vying for L.A.’s top city job (city controller Wendy Greuel, city councilwoman Jan Perry, and city councilman Eric Garcetti). It’s been effective, in part, because there is plenty of blame to go around. But who is Kevin James? Despite his more than five years on the radio as a local talk show host, most Angelenos are meeting him for the first time during the campaign.

On the trail, the persona James projects is that of an independent, no-nonsense Republican determined to root out what he insists is a culture of rampant corruption at city hall. In a city that handed President Obama a more than two-thirds majority, James has been able to shirk the stigma of his Republican Party affiliation by sticking mostly to fiscal issues. The fact that he’s openly gay appears to put him out of step with the national Republican agenda. Add to that the “aw, shucks” speaking style that comes from his still-detectable Oklahoma drawl and you’ve got a compelling alternative to L.A.’s status quo.

But not that long ago James cast himself in an entirely different light. During his years as a host on KRLA and KABC, he pounded away on the need for a border fence to stem the “illegal immigration invasion,” mocked global warming as junk science, and railed against any local politician who dared consider raising taxes—for any reason.

That kind of talk still echoes frequently on KRLA, the station where James had a show from 2007 to 2011, and which features prominent conservative voices such as Denis Prager, Hugh Hewitt, and Michael Medved. The station is a part of Salem Communications, which bills itself as the leading purveyor of conservative and Christian radio content.

James concedes that his show might have been overly brash at first. “Part of it was for entertainment value, particularly in the early days,” he told me this week. “Once I got the audience then I was able to do community service.”

By community service, James means his on-air advocacy for several Los Angeles issues, including decrying the police department’s massive backlog of unexamined DNA evidence in rape cases and blasting the practice of ticketing truant LAUSD students in a way that appeared to target minorities.

But James had no hesitation about dialing up the rhetoric to make a point, even a hyperbolic one. In one op-ed he penned for KRLA’s Web site in 2009, he offers seven reasons why President Obama should appoint Daffy Duck to fill a vacancy on the Supreme Court. Really. Reason No. 2: “Daffy is a black duck,” and hence would qualify as a minority appointment. Reason No. 4: “Daffy is a disabled duck” because of his “severe speech impediment.”

James says he was trying to make a point about how the mainstream media was ignoring qualifications for the Court and instead focusing on “identity politics.”

Global warming also makes him particularly hot under the collar. The problem: “the theory of human-caused global warming is challenged by the fact, among others, that average temperatures were higher during the Medieval Warm Period a thousand years ago,” he wrote in a 2008 piece. At the time, he was particularly irked by a quickly-shelved California Energy Commission proposal to require programmable thermostats in new homes, which, according to James, “would allow the government to control the temperature inside your house.” He explains, “’Carbon footprint’ is code for limitless intrusion into every detail of your life.”

James insists that he has always advocated being a good steward of the environment, though he says the jury is still out on global warming. “To this day, I don’t know if we are or not (experiencing rising temperatures as a result of human activity). I’m not one to question the science or the experts,” he said.

James is running for mayor, not U.S. Senator, and much of the broader conservative agenda he pushed on the radio simply isn’t all that relevant to city hall. “I’m dealing with potholes, parking tickets, and utility rates,” he says about his mayoral campaign.

Even so, it’s not all that clear how much affinity he might have with the voters of a Democratic stronghold like Los Angeles, where close to half the city identifies itself as Hispanic. And yet for years James staked out the territory on the far right of the immigration debate, imploring Washington to seal the border with an impenetrable fence.

He self-identifies as an “enforcement-first conservative,” and, ahead of the 2008 election, lamented that Republican presidential candidate Sen. John McCain was out of step and would “never be one of us when it comes to the illegal alien invasion of this country.”

Though illegal immigration was a mainstay of his early radio show, James now says he’s softened a bit on the topic. “There’s a learning process that takes place” on the campaign trail, he says, and that meeting with different communities in Los Angeles helped him understand the issue from “the other side.”

He also went through several training workshops with the advocacy group National Association of Latino Elected Officials, which helped him understand how “broken” immigration legislation was. “When you experience that, people who are working hard to follow our rules and come to this country, and see how insane some of the rules are and the roadblocks are, I think it does give you a sense of the frustration people feel when they want to come to our country,” he says.

That hasn’t dampened his enthusiasm for a fence, though. Progress on security at the border, he says, would help move the anti-immigration forces toward compromise on other aspects of immigration reform. “Fences work,” he says.