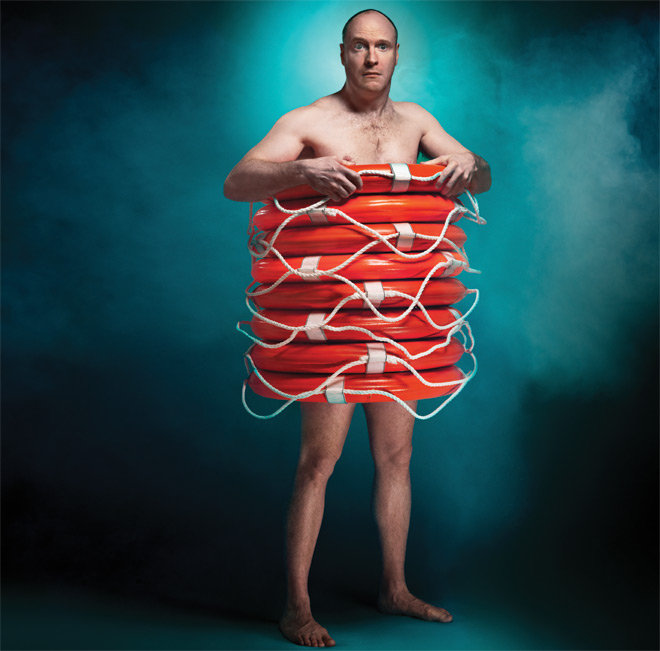 Looking back on his infamous 2011 freak-out, Charlie Sheen claimed that a drug had been responsible for the rantings and wild behavior that followed his ouster from Two and a Half Men. But it wasn’t a substance anybody had suspected. As the actor told Katie Couric, “I think I was doing too much testosterone cream.”

If Sheen did get jacked up on the hormone, he wouldn’t be the first aging Angeleno who turned to it in search of an edge. In an era when AARP members are playing muscle-bound action heroes (The Expendables 3 is coming soon), some guys will do whatever’s necessary to resist the effects of time. And pharmaceutical companies are happy to oblige.

You can’t watch the evening news or a weekend golf tournament without encountering ads suggesting that “low T” is responsible for almost every ailment common to the older male, especially a lack of zest in and out of the bedroom. “I’m getting calls all the time from primary care physicians whose patients are asking them for it,” says endocrinologist Glenn D. Braunstein, M.D., professor of medicine and vice president of clinical innovation at Cedars-Sinai Medical Center. “The direct-to-consumer advertising says, ‘Do you have symptoms [such as] feeling tired, with low libido, erectile dysfunction, more abdominal fat, not having the vim and vigor that you used to?’ Then a patient will go to a doctor and say, ‘I have these things—I’d like to try testosterone.’ ”

In the last dozen years testosterone prescriptions for men over 40 have tripled. Even guys in their late thirties have started asking for a testosterone boost, Braunstein says.

For most adult men what’s considered a “normal” testosterone level varies widely—anywhere from about 350 to 1,200 nanograms per deciliter of blood. The hormone fluctuates daily as well. It’s higher in the morning and goes up when your favorite team wins a game or you just happen to thumb through a Victoria’s Secret catalog, raising confidence, sex drive, and a desire to build skyscrapers. It drops when you marry or become a father, allowing you to settle down and bringing out your nurturing side. And it declines over time—by around 1 percent per year, starting at about age 30, though the figure wavers. You can elevate your levels, to a limited degree, by exercising, eating lots of fat and protein, losing your spare tire, reducing stress, and sleeping more. But if it’s clinically low—often defined as below 250, while 250 to 350 is considered “borderline”—lifestyle changes probably won’t bring it back to normal.

You can buy over-the-counter products that claim they raise testosterone; however, the supplements are largely unregulated by the Food and Drug Administration and the effects unpredictable. (Some, such as the hormone DHEA, can increase estrogen as well as testosterone.) For actual synthetic testosterone you need a prescription, either from those with a medical degree or naturopaths (who can prescribe hormones in California). The most popular form is gel, but you can also get it in creams, patches, tablets, and injections, among other varieties. Though not approved for the purpose, a medication called clomiphene, sometimes alternated with the hormone hCG, is also gaining popularity as a way to get the body to release more of its own testosterone.

The problem is, many clinics specializing in male health prescribe testosterone to men who don’t really require it, says Ronald Swerdloff, M.D., chief of the Division of Endocrinology at Harbor-UCLA Medical School, who helped write the Endocrine Society’s guidelines for testosterone replacement therapy. Because levels of the hormone change throughout the day, you need at least two blood tests, administered about 20 minutes apart in the morning, to get an accurate reading, and extra testing if levels are on the borderline between low and normal. But more than a quarter of men with prescriptions receive them without any testing at all, according to a small study published last June in JAMA Internal Medicine.

“I think that’s malpractice,” says Damon Raskin, M.D., an internist in Pacific Palisades and a medical supervisor for several Ageless Men’s Health clinics throughout Southern California. “You should never treat someone with testosterone replacement therapy without knowing what his levels are.” Testing is vital, he says, because low testosterone can indicate other serious health conditions, like diabetes, or may result from overusing prescription painkillers. Besides, if a man without a real deficiency takes testosterone, a pharmaceutical dose might increase lean body mass and decrease fat, but so would diet and exercise. Any other apparent benefits, like a boost in the bedroom, Braunstein says, would likely be from a placebo effect.

For the 2 to 5 percent of the male population who do live with clinically low testosterone levels, the condition can cause genuine suffering. The hormone plays a major role in erectile function, and it’s key to the sex drive for both genders (some women are prescribed small doses when their levels of testosterone and estrogen decline due to menopause). It can also lead to high body fat and low muscle mass, below-average bone density, depression, insomnia, and memory loss. “When men are walking around with low testosterone, it’s a major problem in their lives,” Raskin says. Supplementing the hormone won’t necessarily fix all these issues, but it often helps.

Synthetic testosterone is relatively safe, though not risk free. It may stimulate prostate cancer in men who already have the disease, Swerdloff says. A recent Veterans Administration study of older men with other health problems found an increase in heart attacks and strokes when they were taking the hormone. (But for younger men it might be harmless or, to further muddle matters, helpful to the heart—low testosterone itself is associated with hardening of the arteries and other cardiovascular issues, according to cardiologist Robert A. Kloner, M.D., Ph.D., a professor at USC’s Keck School of Medicine.) For guys in their peak reproductive years, there’s a separate issue: Testosterone replacement can impair sperm production. One study presented at a San Diego conference several months ago found that 7 percent of men seeking fertility treatments had been using prescription testosterone supplements (in most cases their sperm production recovered within months after quitting them).

All the more reason a doctor’s supervision is crucial. You’d have to take much more than a pharmaceutical dosage to experience a Sheen-worthy meltdown or the sort of ’roid rage associated with bodybuilders and athletes who abuse testosterone and other steroids (yes, testosterone is a steroid). In fact, huge doses of steroids can cause low testosterone levels by damaging the body’s endocrine system.

Getting an edge wasn’t a goal for Tim, a 49-year-old Hollywood stuntman and actor. He knew something was wrong ten years ago, when, he says, “I was fatigued, unmotivated, and had no sex drive.” But he had no idea what the cause was. “I’ve always been an athlete, a fit person,” Tim says. “I was working out, eating well, and taking my vitamins.” Tests at an antiaging clinic found his testosterone levels were extremely low, at “about 100,” he recalls. Within weeks of beginning a regimen of regular testosterone injections, he began feeling better. Since then Tim, who’s now being treated by Raskin, has tried going off the supplement, but each time his fatigue and lethargy returned.

Tim believes the treatment may have saved his career. “I’m one of the older guys still out there, doing some of the bigger stunts, hitting the ground. It’s very physical. And I’ve extended my employment probably another ten years.” Now he worries that colleagues would think he’s cheating (which is why he asked not to be identified by his last name). “I don’t want to be associated with the idea of people abusing steroids or using them for cosmetic purposes.”

Tim’s case, of course, is far from typical. For most men the decline is more gradual and not nearly as severe. Not that that will stop guys from asking their doctors for a little more T. “It would be better if we could think about testosterone in the usual medical sense and not overhype it,” Swerdloff says. But he doesn’t see that happening. “Because it’s linked to the concept of sexuality and maleness, it interests people more than, say, rheumatoid arthritis.”